Skip to main content
RECOMMENDED IN RENT
Moving to NYC after college? Here's how to do it Brick Underground's 2021 guide to co-living spaces in NYC: How to tell the communal disruptors apart The 7 best ways to find a short-term rental while you renovate your NYC apartment NYC apartment leases with major concessions are coming up for renewal. Here's how to negotiate 5 things you should know about renting month to month in NYC
RECOMMENDED IN BUY
How buying real estate in NYC is unlike anywhere else The most expensive neighborhoods in NYC: A buyer's guide for 2021 Buying for the first time in NYC? Be sure to prep your finances first 10 steps to creating a stellar co-op or condo board application
RECOMMENDED IN SELL
A guide to using a no-fee renovation loan from a NYC real estate firm How much does moving to the suburbs cost vs. staying in NYC? What's the best shade of white to paint your NYC apartment if you're trying to sell? Should you sell now or wait? NYC brokers and experts weigh in
RECOMMENDED IN IMPROVE
How to make your NYC renovation more pet-friendly Renovating or adding a kitchen island to your NYC apartment? Here's a checklist The 7 best ways to get your landlord to fix stuff in your apartment Want to use reclaimed materials and appliances for a renovation? Here's what you should know How to deal with flood or water damage in your NYC apartment
Small Wonder

The apartment at 225 Adams St. has a Murphy bed to maximize the space.

A dearth of closet space is a common problem in many New York City apartments. Not so in this 12th-floor studio co-op at 225 Adams St. in Downtown Brooklyn. The apartment has four of them, two near the entrance and another two just beyond the bathroom.

The price tag is $369,000, which is relatively reasonable, considering the median sales price for a studio in the area is $399,000, according to a recent market report. The apartment is in contract, but still on the market for a reason (the reason being: that contract could fall through). 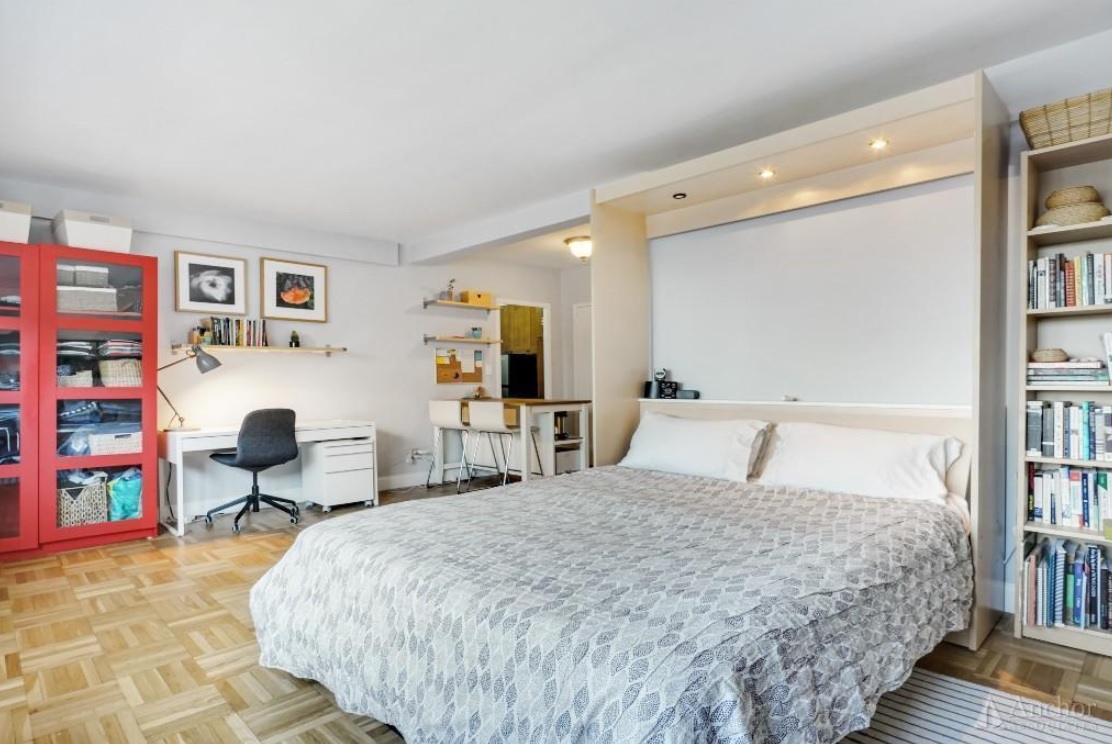 The main living space appears to be about 260 square feet, judging by the floor plan, which makes it perhaps not quite as “X-Large” as it’s described in the listing. There is a Murphy bed that can be tucked away when not in use, to make the space feel a little roomier.

As it's currently configured, there’s room for a TV area with a couch, a chair, and a coffee table, a tiny dining area with a two-seat table by the window, and a a desk. Notably, just outside the bathroom there's also a dressing area that can also be used as office space, according to the floor plan. It's possible that the apartment's current occupant prefers to work in this sunny space rather than in a windowless box at the back of the apartment. 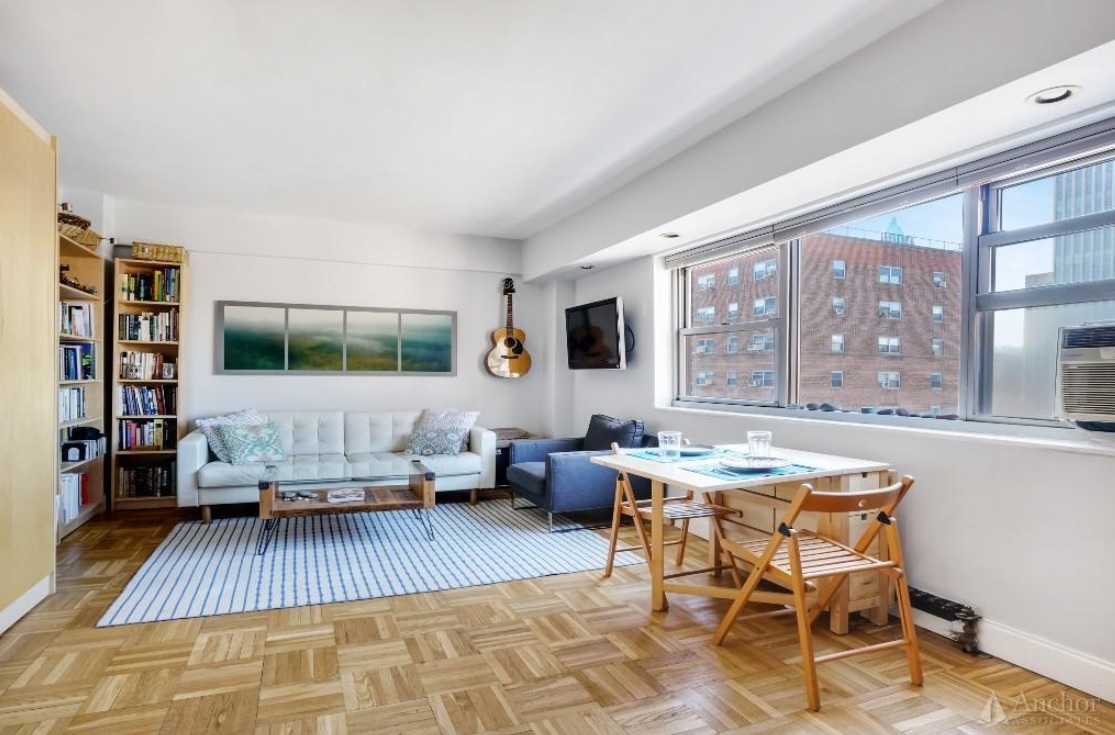 The lighting situation appears to be a little strange: there's a single line of recessed lights in a dropped section of the ceiling by the window, meaning that most of the light in this room is coming from this one area. There are, however, three small lights above the bed to add some illumination to the other side of the room.

The hardwood floors look to be in decent shape. 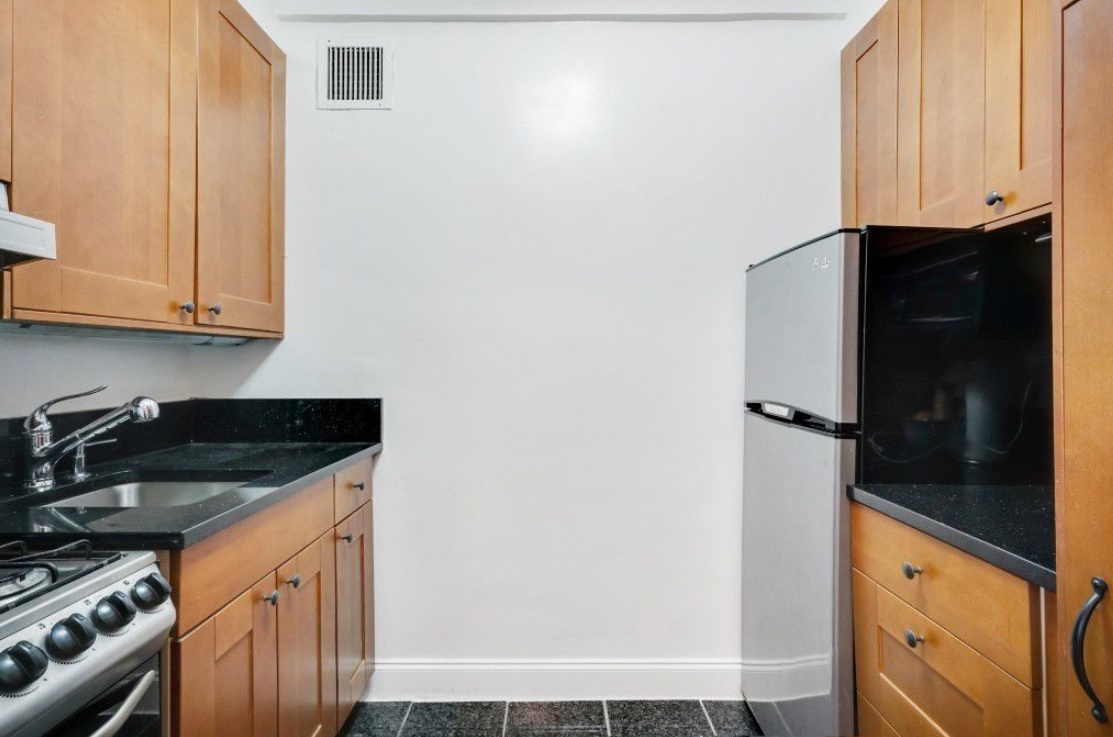 The separate kitchen has black tiled floors, matching granite countertops, and a fair amount of cabinet space. There doesn’t seem to be a whole lot of counter space, but a small breakfast bar with a couple of chairs just outside the kitchen can also be utilized. 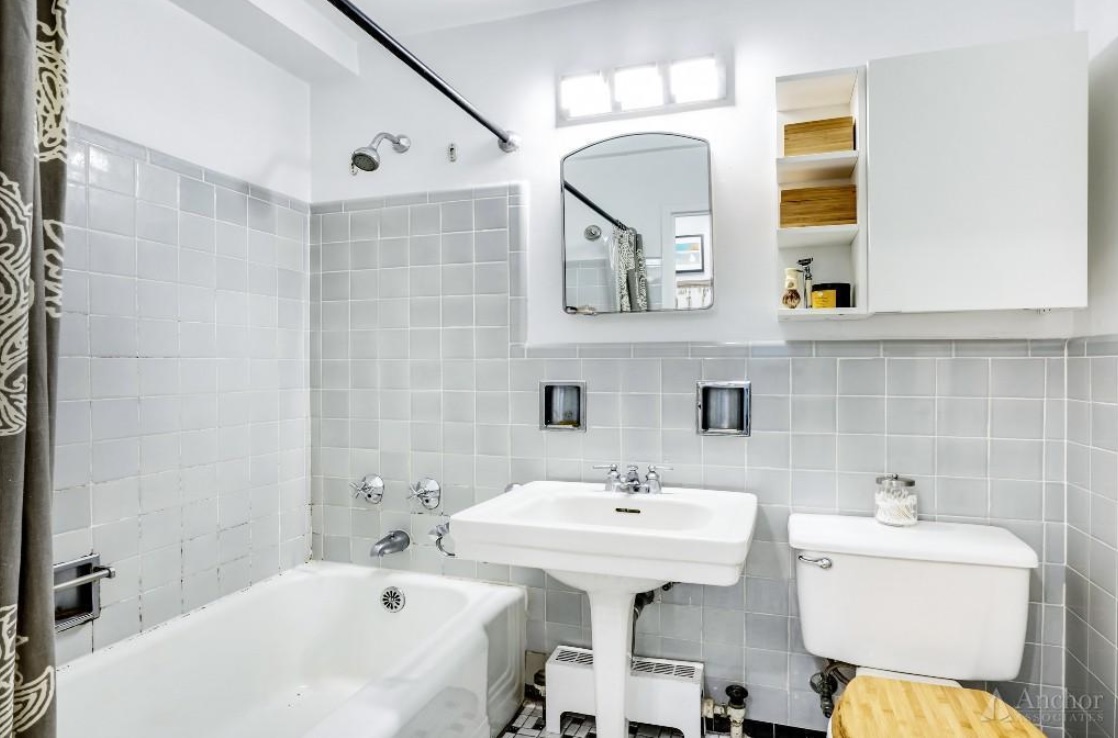 The bathroom has definitely seen better days, as there are grubby grout lines in the shower. There’s also a pedestal sink, so there's no under-sink storage, but there is an additional cabinet above the toilet. Finally, the blond-wood toilet seat is an odd choice in a room that’s otherwise white and gray, but that can easily be replaced. 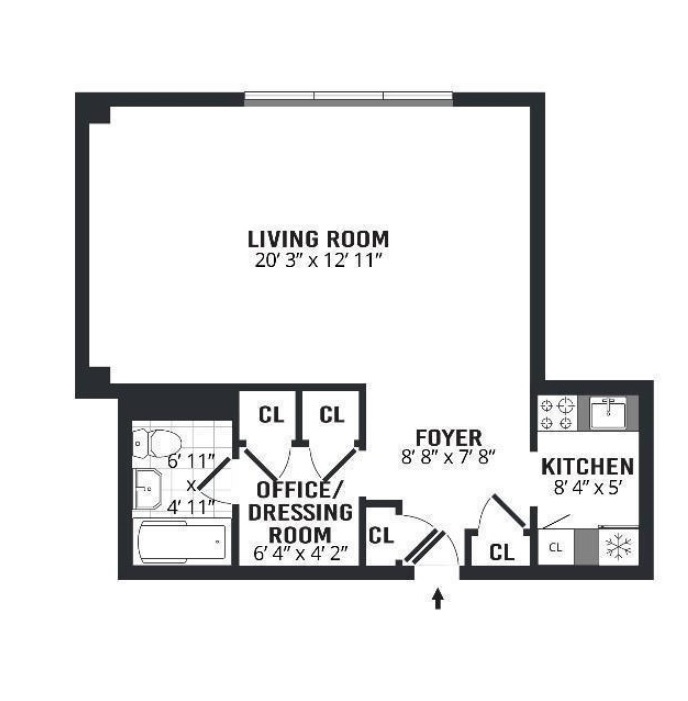 The apartment is in the Concord Village complex, which consists of seven 17-story buildings at the foot of the Brooklyn and Manhattan bridges, surrounded by landscaped grounds. This is a full-service building that accepts dogs and cats and has a doorman, an elevator, a common roof deck with city views, laundry, parking, bike storage, and long-term storage (which has a wait list). The complex's gym is two buildings away and costs $30 a month. Maintenance is $690 a month.

The building is 4-6 blocks from the Jay Street-MetroTech, Borough Hall, High Street, Clark Street, and Court Street subway stations, with service on the R, 2, 3, 4, 5, A, C, and F trains.

The Market The 3 best websites for buying a co-op or condo apartment (or entire brownstone) in NYC
The Market How do I find a studio that doesn't feel like a jail cell?
Work in Downtown Brooklyn? 6 neighborhood picks within a half-hour subway ride
Brick Underground articles occasionally include the expertise of, or information about, advertising partners when relevant to the story. We will never promote an advertiser's product without making the relationship clear to our readers.
topics:
co-ops Downtown Brooklyn Small Wonder studio
SHARE
TWEET
BRICK’S PICKS