This Sutton Place studio has an alcove—for a dining table. Douglas Elliman

This Sutton Place apartment, 60 Sutton Pl. S., #10LN, bills itself as an “alcove studio,” but in this instance, the alcove, which is next to the kitchen, is for your dining table. While alcove studios typically imply separate sleeping spaces, putting the bed close to a stove is not a good idea. Your bed is just going to have to go in your living room like other studios.

The 560-square-foot co-op unit is pretty, but at $475,000, a little on the expensive side, since the median for a studio co-op in the neighborhood is $432,000, according to StreetEasy. But some might find it worth it because of its natural light, large windows, and a whopping four closets (which is not the norm in a studio). 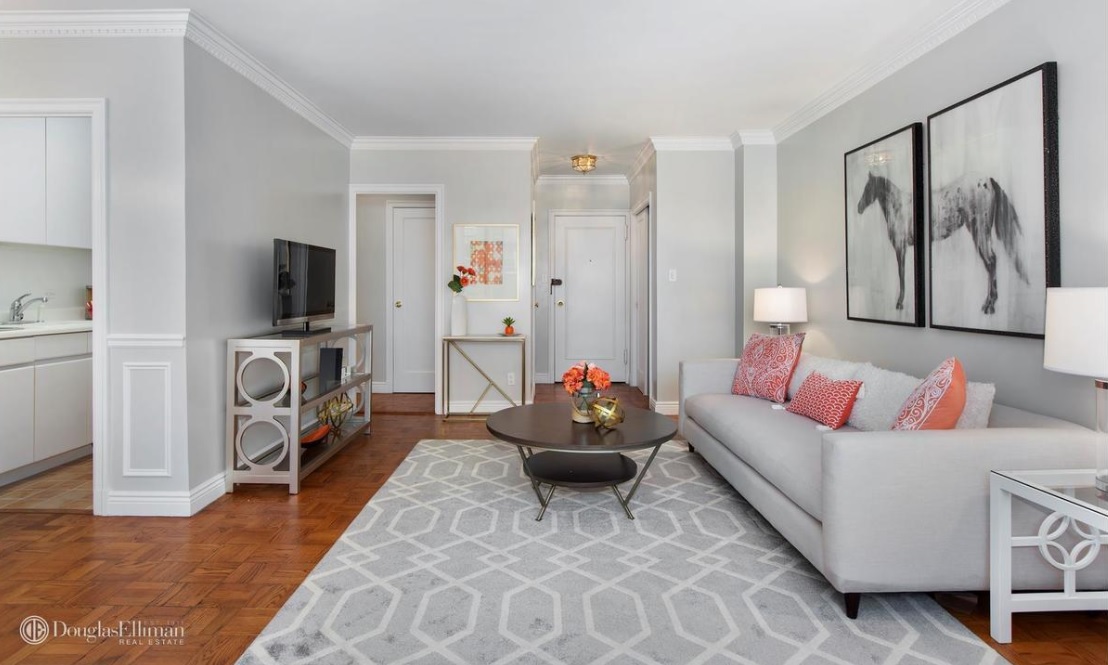 The sunlit living space is striking, and has hardwood flooring (mostly covered by a rug), oversized windows (that unfortunately have a view of another building), warm gray walls, and white moldings, trim, and door casings that add a touch of elegance to the space.

As it’s currently staged, there’s room for a TV-viewing area with a couch, two side tables, a chair, and a coffee table, as well as a desk by the window so you can do your work by the light of the sun.

There isn’t a bed in here at the moment, which leads one to believe that the couch pulls out into one. Anyone who isn’t fond of having to do that each night would be wise to forego the desk, and put a bed by the window, instead. 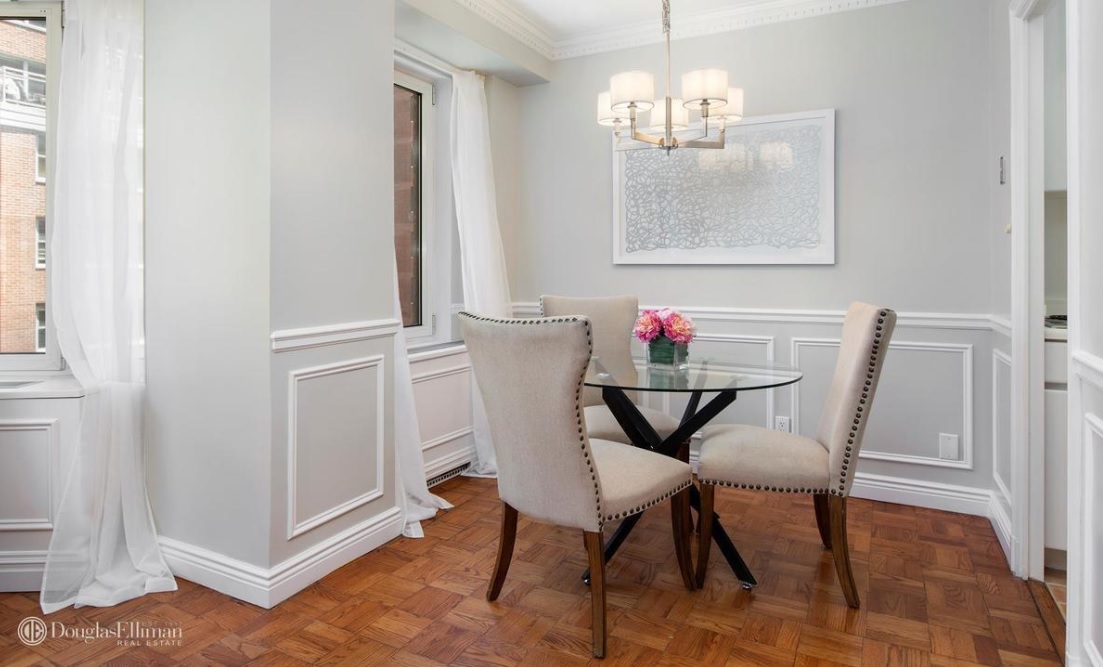 Just off the living room is the windowed dining alcove, a decent-sized space that fits a small round table surrounded by three chairs, and is topped by a modern-looking chandelier. 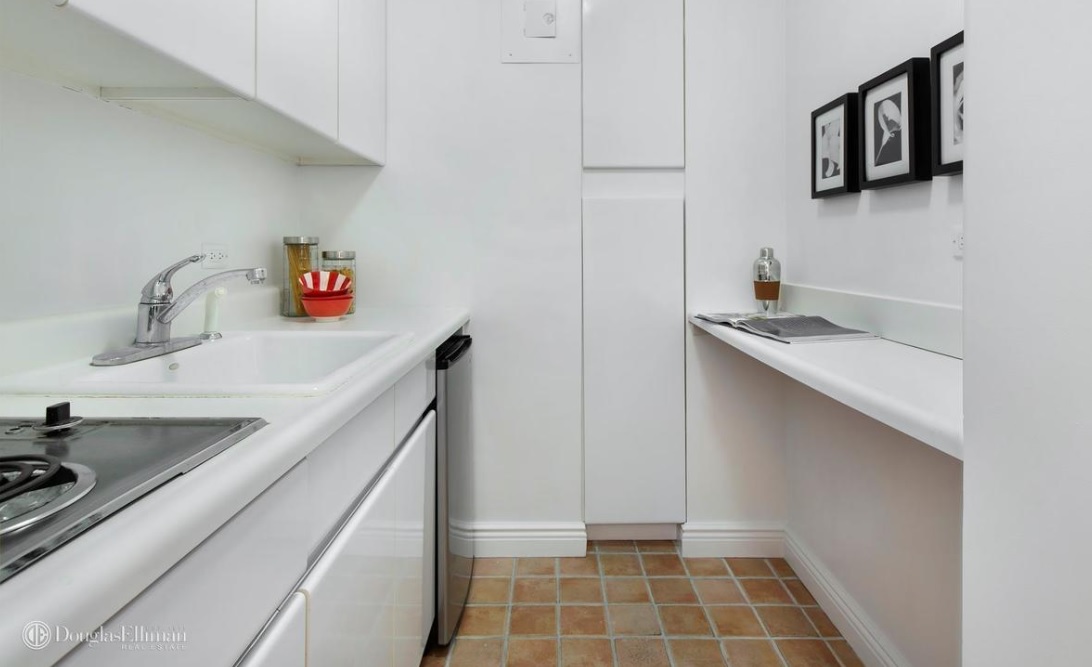 The kitchen is ok—if a bit dull. It’s exceedingly white, which might mean that it’ll be hard to keep clean, and there isn’t a whole lot of counterspace, so anyone wanting to go all out in here is probably going to need to expand into the dining room. All that aside, there’s a dishwasher—which isn’t always a given in a studio—so that’s a big plus. 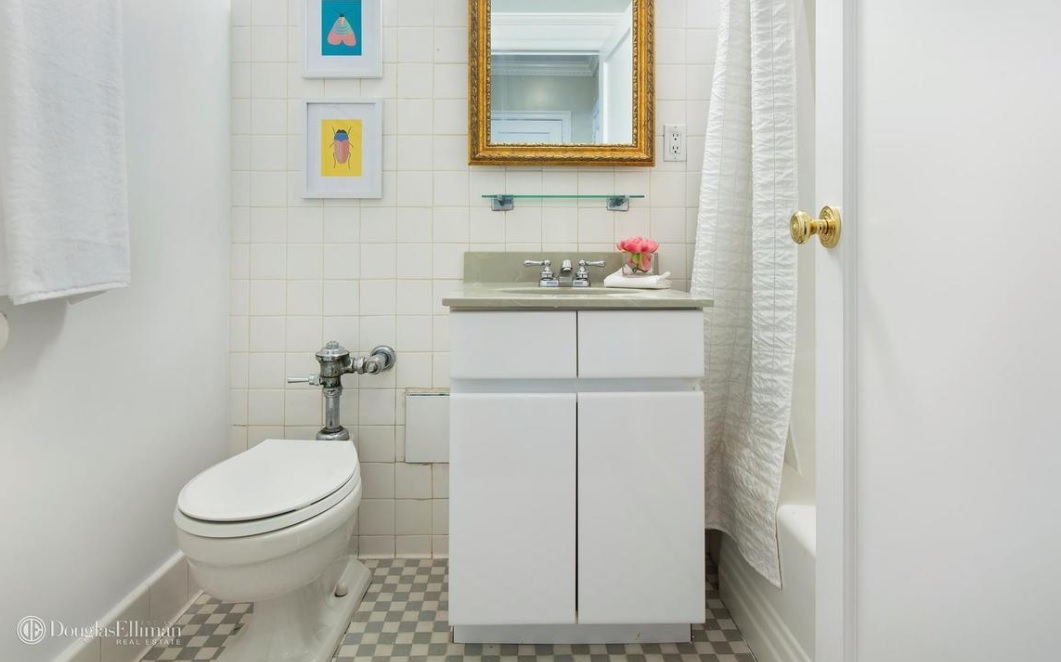 The bathroom is simple, with white tiles on the walls, gray-and-white checkerboard tiles on the floor, and a large vanity for storage. The gold border around the mirrored medicine cabinet seems out of place with the chrome fixtures, but that can be easily remedied. 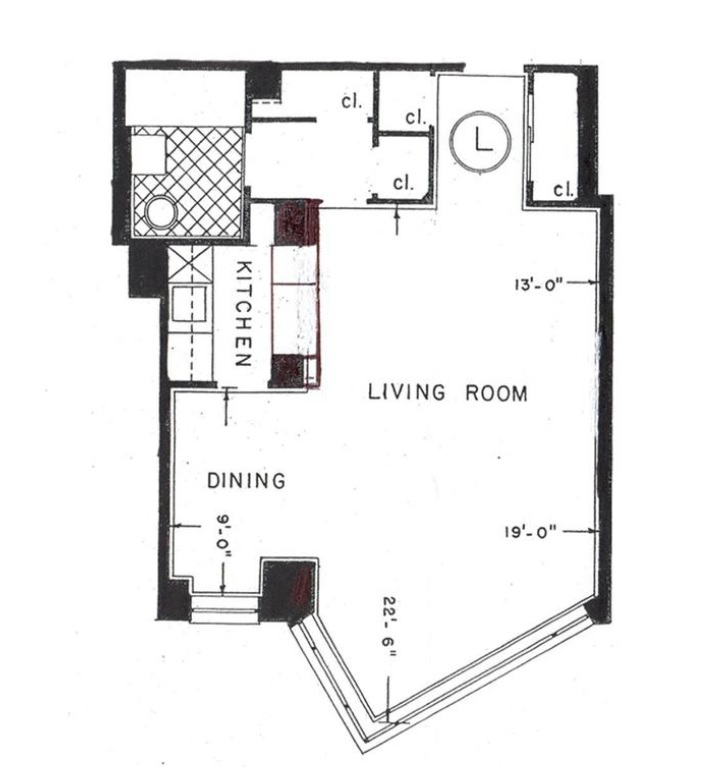 The studio is located in a full-service, luxury co-op building with a circular driveway, a renovated lobby, a gym, private storage bins, a valet shop on the lobby level that offers laundry and dry cleaning services, and a guaranteed garage space with direct building access (for $350 a month).

Pieds-à-terre and trust ownership are permitted, 70 percent financing is allowed, and all pets are welcome in the building. Maintenance is $1,271 a month.

The E, M, and 6 trains are three blocks away at the Lexington Ave.-53rd St. stop, and three bus lines are within two blocks.

closets Small Wonder storage studio Sutton Place
Brick Underground articles occasionally include the expertise of, or information about, advertising partners when relevant to the story. We will never promote an advertiser's product without making the relationship clear to our readers.
Share:

5 houses in Salt Lake City, Utah, where business is booming

The new home office: We tried out private co-working spaces in upscale NYC rentals. Here's how it went