Test-drive: a virtual reality tour of a West Village condo

A virtual reality viewer and its smartphone-ready tour.

There are dozens of reasons why you should check out an apartment before buying it. (Number one: to make sure everything's in working order—read on for more tips on what to look for on a visit.) But of late, developers and real estate agents have been introducing virtual reality into their marketing toolkit. Earlier this year, the New York Times chronicled the efforts of brokers to market still-to-be-finished condos in Brooklyn and Queens, among a handful of others. (According to the paper, the technology has also been deployed by interior designers who want clients to gain a more multi-dimensional sense of how their homes will be transformed.) Curbed also recently tried out a VR tour for Pacific Park in Prospect Heights.

Last spring, a representative for ProMedia, a studio that creates VR tours, told us that slowly but surely, more real estate experts are turning to the technology, lured by the chance to provide a more immersive experience for buyers checking out spaces. And indeed, virtual reality seems to be gaining some foothold in the industry. Take 275 West 10th Street—aka The Shephard—a former warehouse in the West Village that became a rental that, through the Naftali Group, has morphed into a 38-unit luxury condominium project with amenities like a spa, game room, fitness center, and a library.

Central to their marketing, however, is the lobby that leads to a private garden, a space still unfinished, though it's slated to be completed at the end of the month, says Matt Van Dam, executive vice president of marketing and development for the Naftali Group, which is handling the project. Though the firm has dolled up the sales office with finishes that evoke the building's main entrance, he says so much about it still doesn't translate, and so they turned to virtual reality, using it as one of two VR tours they've been using to showcase the space. (Their showroom is equipped with virtual reality View-Masters—like the red toys of old, but you have to use a smartphone, not photo reels—with which they can "walk" clients through the lobby and the penthouse's terrace; they sent one to the Brick Underground office for a try.)

"It's one of the more interesting parts of our project," Van Dam says. "It's a really important element of the experience for the building... It sets the tone for the rest of the experience, but oftentimes, it's not communicated well in a sales environment experience. It's difficult to do." To show off a project's kitchen and bath, developers have long relied on building a facsimile of them using the same materials in their marketing offices, but building an entire lobby that captures a space's volume and vibe is a bigger logistical conundrum. 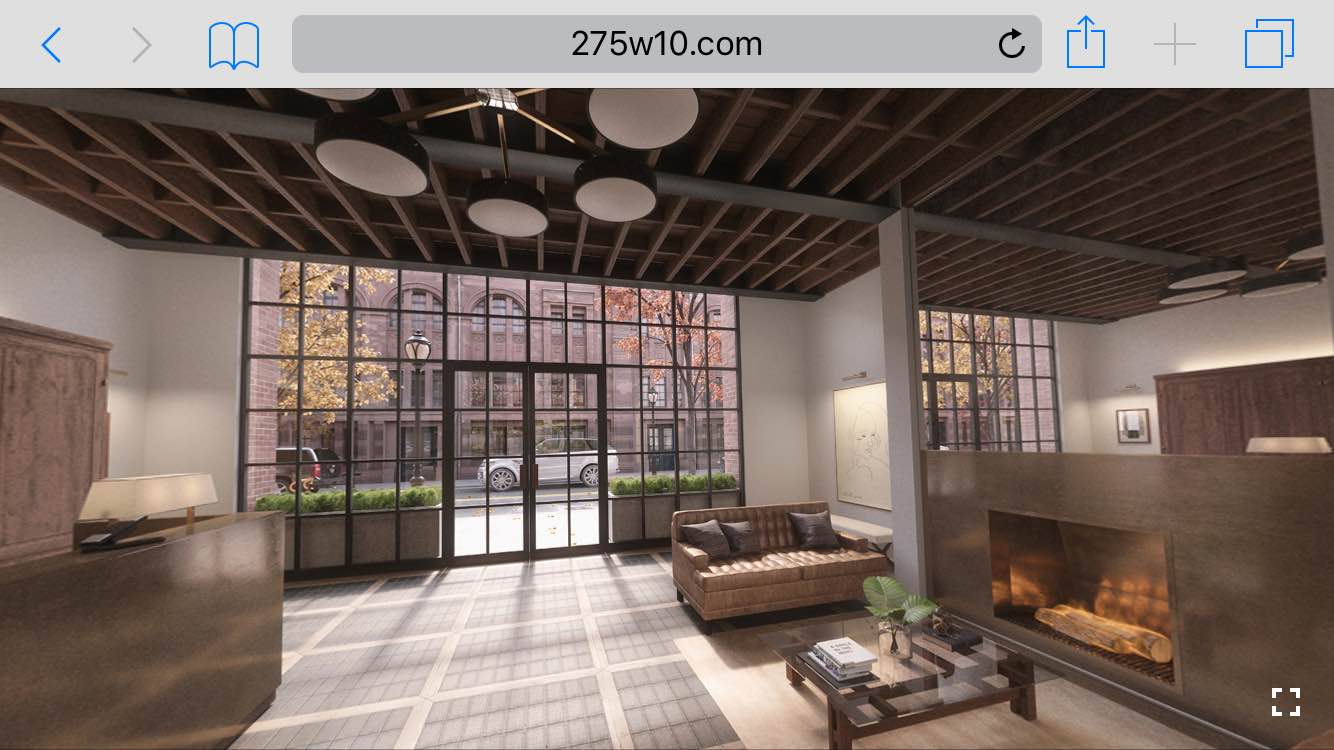 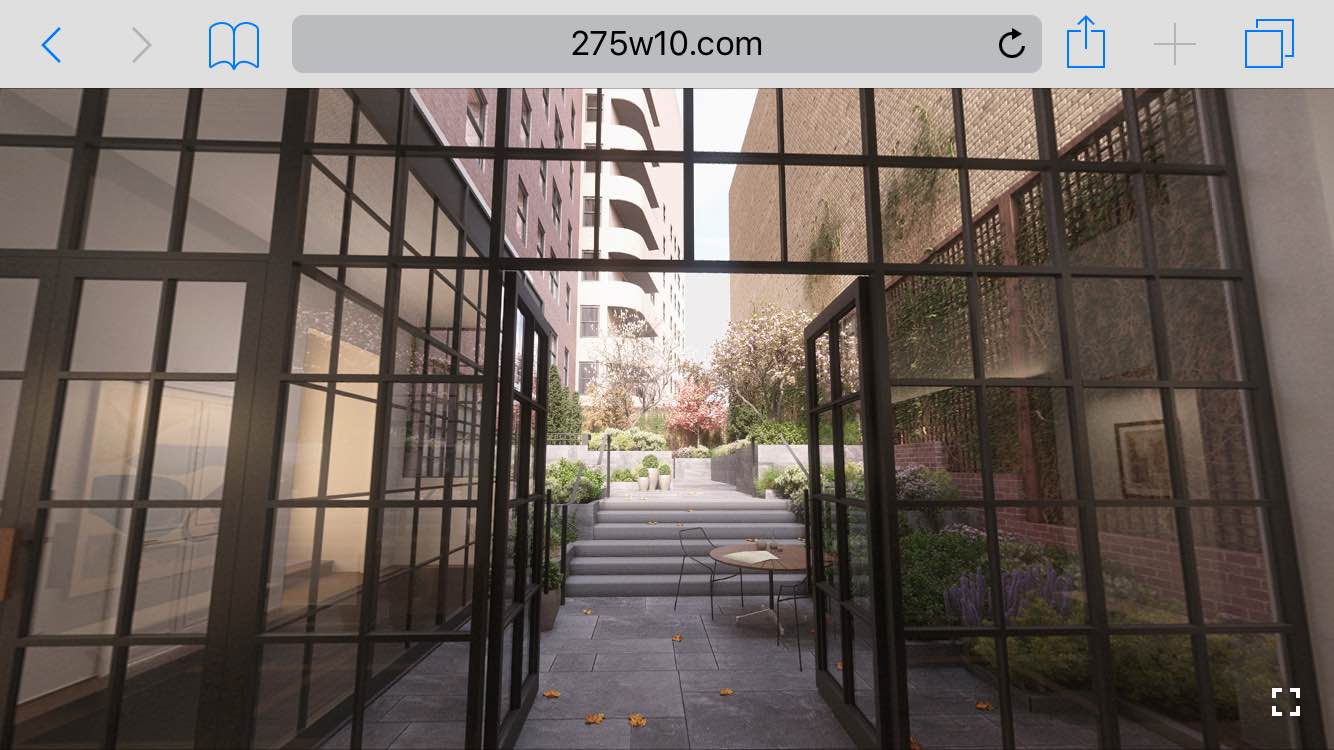 Ditto penthouses and their outdoor spaces, which tend to be finished last during construction, and whose grandeur may be hard to describe or capture in floorplans or even the best of renderings. "It's always very challenging to convey what space feels like," says Van Dam. In The Shephard's case, the developers also wanted to show off views that, Van Dam says, aren't typical of the West Village, where buildings tend to be low-lying, rarely offering the 360-degree city vistas that other, taller projects have come to rely on to sell off units. 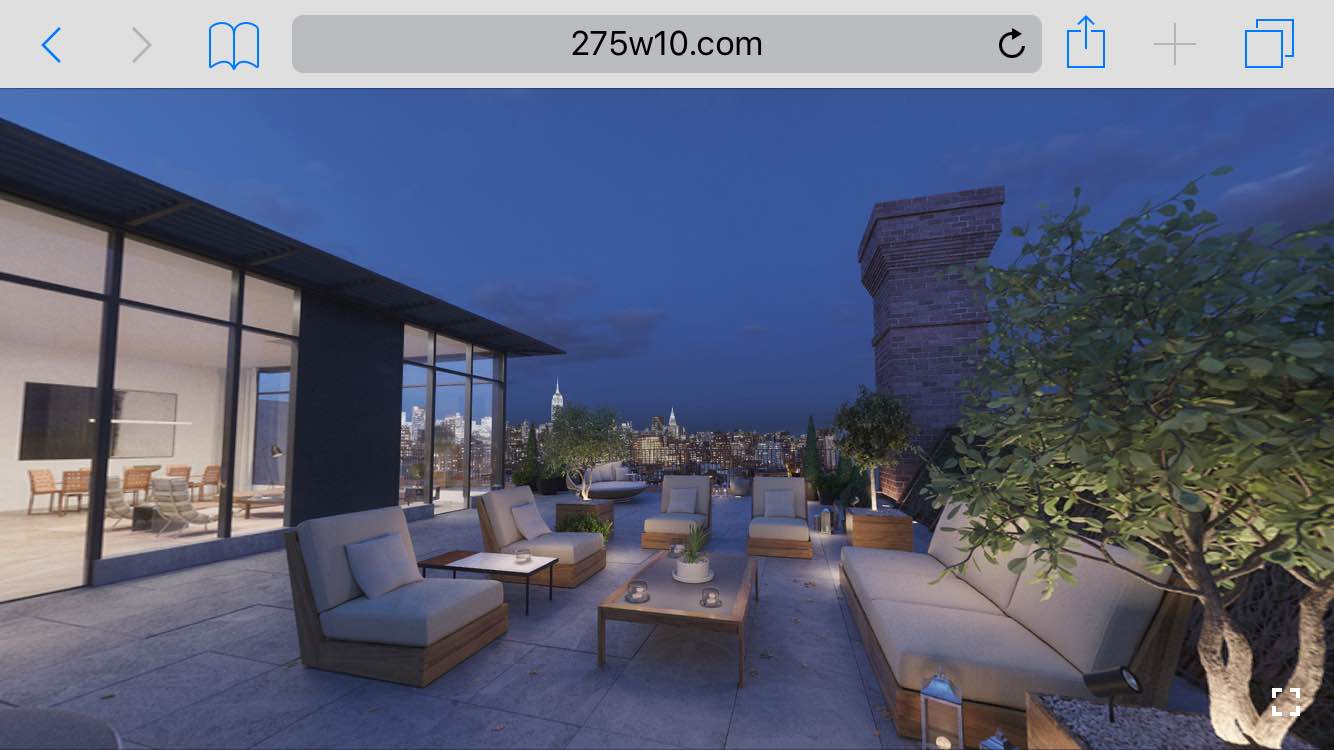 So what's it like actually taking a virtual tour with headsets? In a word: trippy. But in a good way, the same way one would feel, perhaps, after trying on a theme park ride for the first time (but with a little less excitement). For starters, once you don that viewer, it's easy to forget that you're not walking through an actual space, but a close representation of one, which means you're still in the room you're standing in and might run into chairs and tables (and people) around you. You can look up the ceiling and gain a sense of height, peek at the flooring, and turn around to view the entire room. For The Shephard's tours, stepping forward didn't exactly "move" me forward or backward around the room I was checking out through the viewfinder. (And if you're prone to seasickness, it might feel a little jarring.) In short, it feels like stepping into a rendering, but you can't touch the space or really make your way through it except only from one vantage point.

Considering the fees for making a VR tour, which, Van Dam says, run in the thousands, it's unlikely VR will be available for each part of a project or an apartment. "Each rendering can cost $4000 to $8000 for a really good, top-notch [one]," he explains. "VR is even more than that."

Still, there's no denying the novel appeal of it. But there's more to it than that. It could also streamline the apartment-buying process, says Matthew Leone, chief marketing officer at Halstead Property, which has used VR recently to market some new, not-yet-built apartments the firm was handling. "We're huge fans of it," he says. "It can help the [apartment-hunting] process be more efficient," allowing buyers to make purchasing decisions faster, and weed out listings that may not make the final cut. (The firm is currently testing VR for resale apartments.)

Nonetheless, VR isn't likely to replace a real walk-through of an apartment anytime soon. Which it really isn't meant to do, says Van Dam. "I always believe in people touching and seeing [real estate] as much as they can," he says.

Are virtual reality listings the future of apartment-hunting, or just a high-end gimmick?

new development products, apps, & tech reviews & test-drives selling
Brick Underground articles occasionally include the expertise of, or information about, advertising partners when relevant to the story. We will never promote an advertiser's product without making the relationship clear to our readers.
Share:

The pandemic reduced my paycheck. Can I still rent a new apartment in NYC?

These New Yorkers are getting creative with their workouts at home