Fleeing the city? PicketFencer aims to help you pick the perfect NYC suburb

Whether the culprit is an hours-long car alarm serenade, a daily clamber to your walk-up (toddler and stroller in tow), or just the crippling burden of the monthly rent payment, plenty of New Yorkers have hit a wall and thought, "Forget this. I'm moving to the suburbs." But unless you happen to have grown up in one of these areas, most of us are about as familiar with the tri-state burbs as we are with the neighborhoods of Staten Island. (Apologies to the borough, but it's true.)

"I was born and raised in New York, and had been living in Brooklyn with my wife in a small apartment. We started thinking about expanding to suburban areas, and found that information for someone who wasn't already familiar with the options was really all-over-the-place," explains David Leibowitz, founder of PicketFencer, a new search site that aims to streamline the suburb-selection process for New Yorkers. "We wanted to create something that unified all the available information." 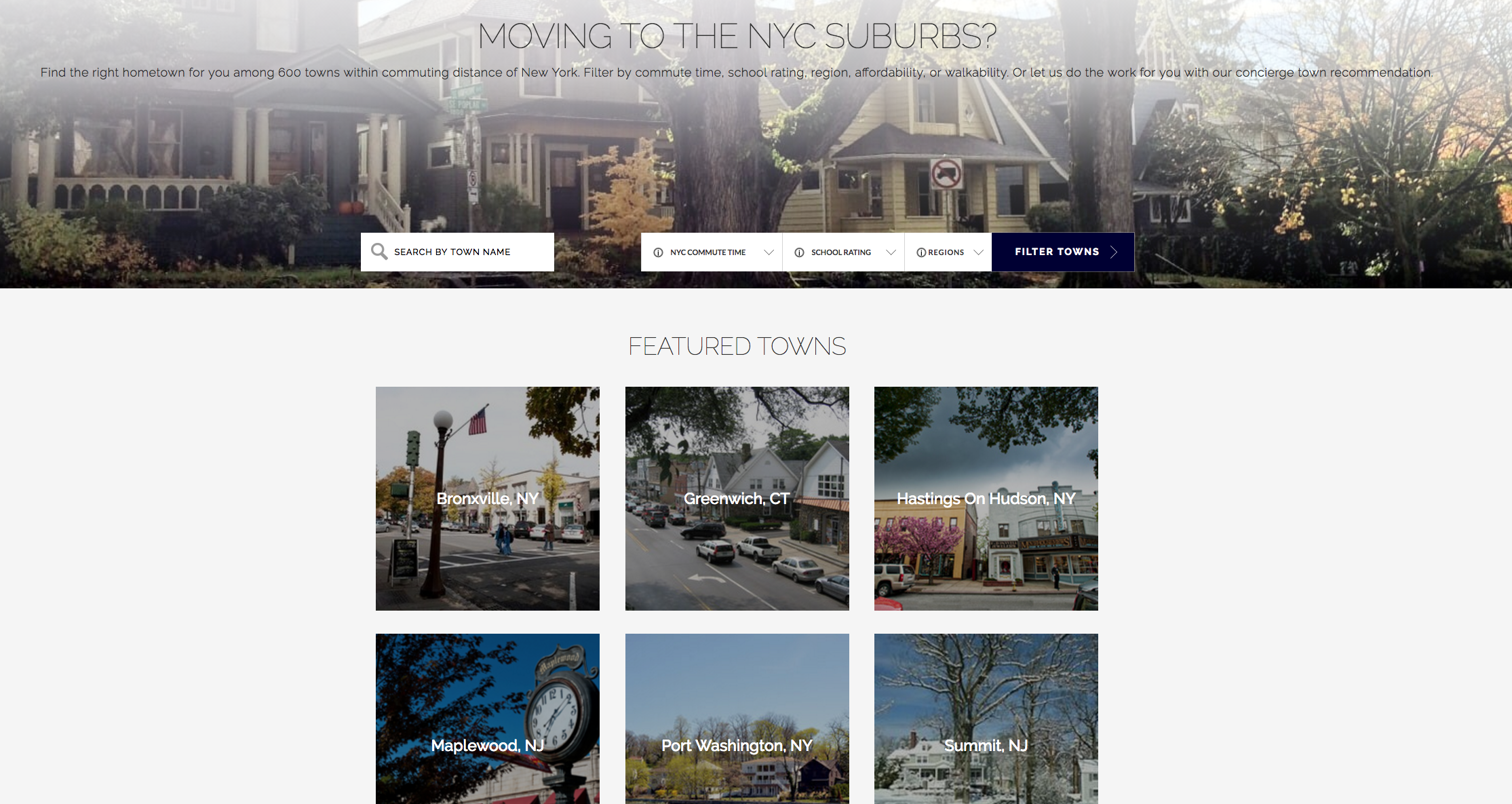 The way it works is pretty straightforward: The site keeps a running list of around 600 different towns in New Jersey, Connecticut, Long Island, and upstate New York that are easily browsable. You can also narrow down options by commute time, school rating, walkability, price range, and region. For even more specificity, you can take a quiz sussing out your priorities on those same factors, as well as other considerations like neighborhood vibe ("high-powered professional" or "laid-back creative") and the feeling of the town (would you prefer some nightlife, or a sleepy small town?).

For instance, I listed commute time to the city and school quality as top priorities, as well as a preference for "creative" neighbors and a $500,000 range for my budget, and was offered up White Plains as an option: 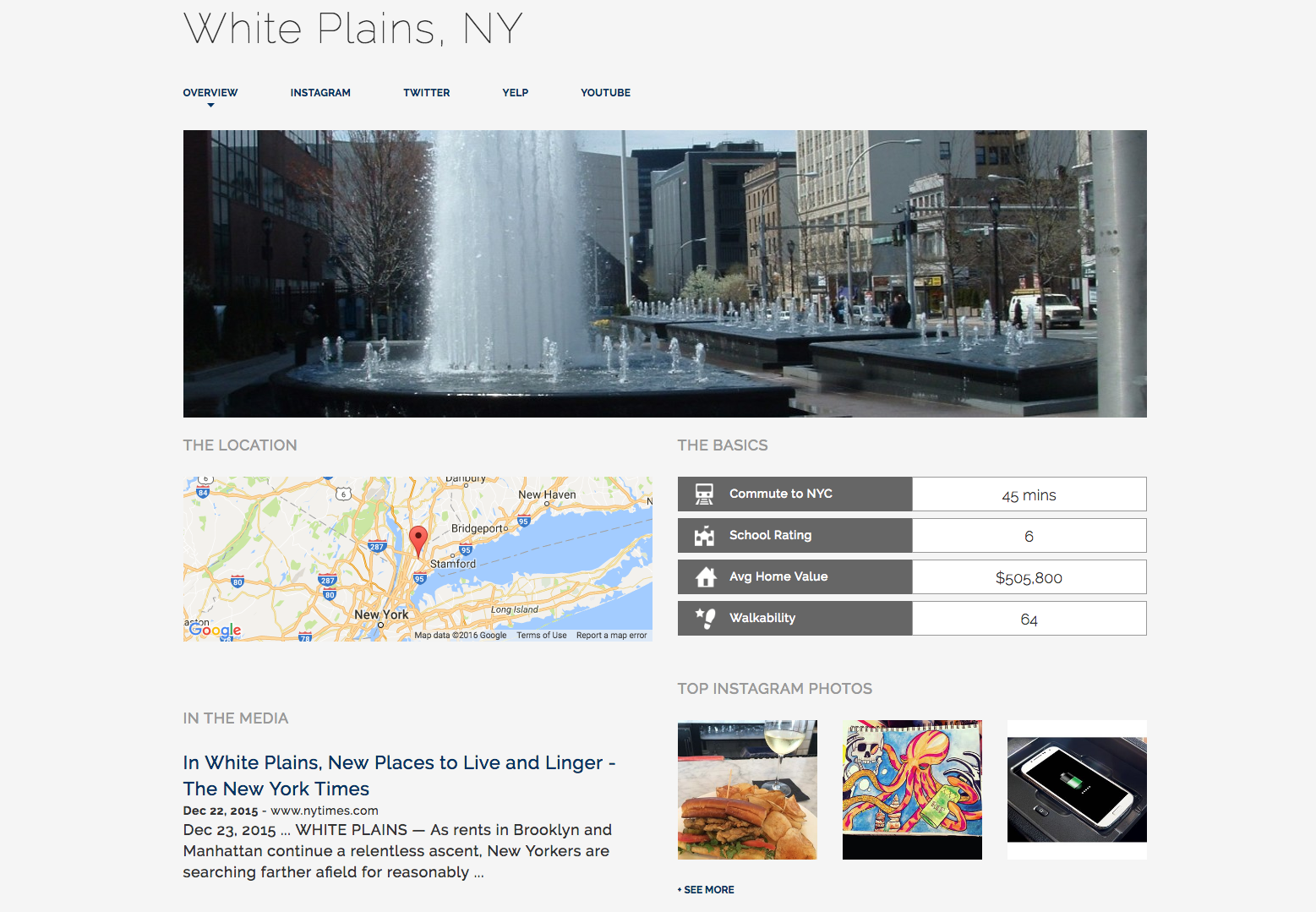 The brokerage Suburban Jungle exists to help buyers make these same decisions, as does search site Somewhere Ideal, but PicketFencer seems to be the first to integrate social media feeds into their research as a way to add more texture to a search, showing what kind of photos people are posting in a given area, and perhaps more importantly, what the options are on Yelp. "You want to see the community and flavor of a place, that's what makes it feel like home," says Leibowitz. "It counterbalances the more cold, clinical data aspect of the search."

Once you've found a region that interests you, you can have a free call with a site "concierge," who can pass along more information and put you in touch with a recommended local agent. (All the agents are interviewed personally before being allowed to join the site network, Leibowitz tells us, and the site collects a fee for leads generated by its concierge service.)

"We have a network of partner agents, and are in the process of recruting agents to represent all of the towns," says Leibowitz. "Right now, we have a stronger presence in Maplewood and New Jersey, but are looking to build out into all of the regions that we cover." They haven't yet fielded any inquires for areas where they don't have agents, he notes—so if you ask for help finding a place in one of the less popular towns, you may play guinea pig. Nevertheless, the firm is looking to expand into all the towns featured on the site.

PicketFencer has been around in beta form for a few months, and just launched formally at the beginning of August, so it's still a relative newcomer to the search scene. But not a bad option to have on hand if you're prone to spending your lunch hour dreaming of backyards and in-ground pools.

Splitting the difference: 3 NYC neighborhoods where you can live like it's the suburbs

Suburbs in the city: Buy a house, get a yard, save majorly on taxes

Maplewood products, apps, & tech suburbs
Brick Underground articles occasionally include the expertise of, or information about, advertising partners when relevant to the story. We will never promote an advertiser's product without making the relationship clear to our readers.
Share:

Can you get a home equity loan on a co-op?