Bertine Block : A small street in the Bronx that offers a window into 19th century NYC

If you're walking down East 136th Street between Willis Avenue and Brook Avenue in the Mott Haven section of the Bronx, you'll likely find yourself intrigued by the striking row of townhouses and tenements that line the thoroughfare known as the Bertine Block Historic District. It's the “brick work and architectural detail” that “knocks people out” says Professor Lloyd Ultan, Bronx borough historian and author of The Bronx: The Ultimate Guide to New York City's Beautiful Borough.

Although there are 31 buildings in the historic district (including numbers 408 to 412 which were the first to be built there in the 1870s), the real architectural standouts, and the structures that gave the block its name, are the 20 built by developer Edward D. Bertine.

One of the reasons this short street was designated the Bertine Block Historic District back in 1994 by the Landmarks Preservation Commission is that the four groups of townhouses and two groups of tenements reflect the “history of real estate development in the southwestern portion of the Bronx," according to to the commission. Also, the early residents of the rowhouses and tenements in the district represented  “a cross section of the population that came to settle in the Bronx in the late 19th century, including the American-born as well as immigrants.”
The latter were primarily from Germany and Ireland and the mix on the block was professional in the single-family homes and working class in the tenements. An LPC report calls the block “a physical manifestation of the variety of people from varied ethnic and national backgrounds who have lived and continue to live on the block."

The first rowhouses were built on the Bertine block in 1871, but further development had to wait until  “after the 1880s when the Third Avenue elevated rapid transit line opened nearby, connecting the mainland with the Manhattan business district,” per Ultan’s book.

Read on for more interesting facts about Bertine block both from back then and from now:

1. The U.S. Capitol Dome and Civil War cannons were made in Mott Haven, not far from Bertine block.

In 1670, two brothers—Colonel Lewis Morris and his brother, Captain Richard Morris—bought property from Jonas Bronck, the first European to settle in the Bronx and the man who gave his name to the borough. The land the Morris family bought was called Morrisania and included what are now the neighborhoods of Morrisania, Melrose, Mott Haven, and Port Morris, according to the LPC. In 1828, one of the brothers’ descendants, Gouverneur Morris II, sold a plot of his inherited land on the Harlem River at Third Avenue to Jordan L. Mott. Mott, the inventor of a coal-burning iron cooking stove, built an iron works plant there and established a new community around it, naming the area Mott Haven.

Mott built a home near his foundry, and in 1850, in order to attract other industries to his new fiefdom, he laid out a canal that allowed boats to travel as far inland as 138th Street. By the end of the 1800s, the area was bustling with lumber yards, saw mills, stone yards and several piano factories.

2. Its most exquisite houses were built by a former Manhattan milkman.

The aforementioned Edward D. Bertine was a milk-dealer-turned-builder in the late 1800s. East 136th was his first venture into the realm of real estate development.

He built his first 10 houses—numbers 414 to 432—on spec on the south side of the street. Bertine and his family moved into number 416.

All were designed in the Queen Anne style, primarily of beige brick and stone with decorative trims of brick, stone and stained glass. The houses had flat roofs, gables, a variety of window designs and tall chimneys. Each of the homes were three stories tall, with a front parlor and rear dining room on the first floor, two rooms on the second and four rooms on the top floor, according to the LPC report.

The rest of the Bertine homes on the block were built in two groups. Six of them, built in 1892, are in the Romanesque Revival style with high stoops and wrought iron railings and the final four, built in1895, are in the Renaissance Revival style and were constructed as two-family homes. The Bertine rowhouses were bought by middle-class New Yorkers, some professionals and some of whom commuted to work in Manhattan, most likely via the Third Avenue El. 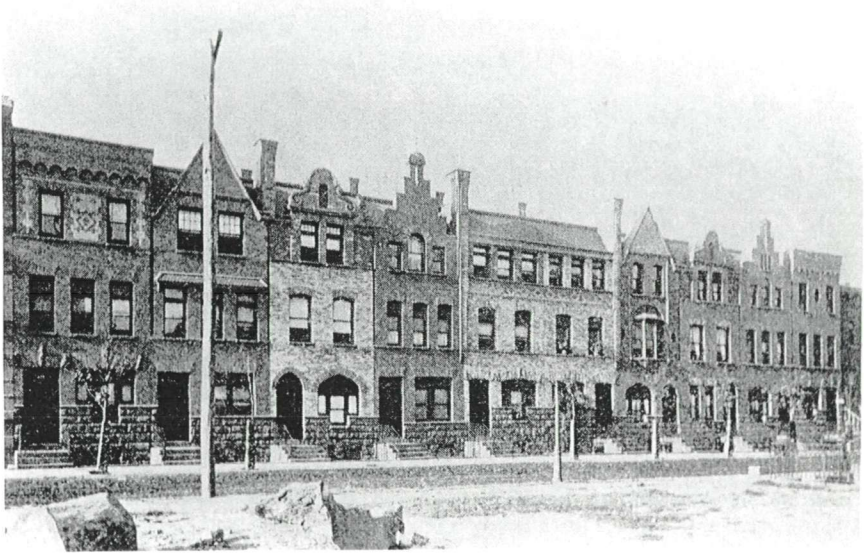 A view of the block in 1897. Courtesy Landmarks Preservation Commission

3. The 10 most beautiful houses on the block were designed by the architect famous for the Apollo Theater.

Although Bertine chose two little-known architects for his final two groups of homes, for the first he chose a well-known architect of the time, George Keister. Keister built several Broadway theaters and at least four in the Bronx.  Although most have since been demolished, three that still remain in  Manhattan are the Belasco on West 44th Street (known as the Stuyvesant when first built) ; the Selwyn on West 42nd Street (now the American Airlines Theater), and Harlem’s Apollo Theater on West 125th Street.

Three other buildings of his are still standing as well: the First Baptist Church on Broadway and West 79th Street that he built at around the same time as the Bertine homes; the Gerard Hotel on West 44th Street and 9 East 90th Street, now a part of the Cooper-Hewitt museum but once the home of the McAlpin family, who built several impressive homes for themselves in the area a decade before Andrew Carnegie ever did.

4. Some of the homes on the Bertine block have two street numbers.

If you walk down the block and take a close look, you will see that some of the homes have two street numbers. One, which is in stained glass, predates 1907, the other came later.

Here’s why: Before 1907, the line dividing east and west in the Bronx was considered to be the Harlem River and buildings were numbered accordingly. According to The Bronx: The Ultimate Guide to New York City's Beautiful Borough, after 1907, the Bronx Borough President changed all that and made Jerome Avenue the dividing line instead—hence two number designations for homes that were built before 1907.

Interesting fact: Jerome Avenue is the dividing line if you are going to make the longitudinal halfway point extend up from Manhattan; it is not the geographic halfway point in the Bronx. 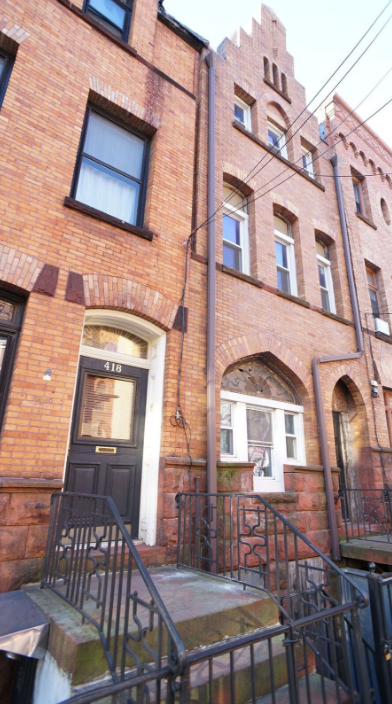 We “don’t want it to become the next Williamsburg,” says Mark Karten, owner of Karten and Lowe Real Estate, who lives just a few blocks from the Bertine Block Historic District. “The interest in Mott Haven, in general, is steady and growing.  Either prospective renters and buyers know and love the area for what it is (they already live here), or we're getting folks coming from Brooklyn.”
A residential building that opened in Mott Haven this fall was fully rented within three weeks. The building, at 356 Willis Avenue, has studio to “convertible” two-bedroom apartments with open floorplans, stainless steel appliances and recessed lighting; rents range from $1,350 to $1,650.
136 Alexander Avenue, one of a pair of buildings being built in the neighborhood (the other is at #135) should be ready for new tenants this coming Spring. Both buildings are four stories tall, each has six units with ground floor commercial space. Units are mostly one- and two-bedrooms with 15-foot ceilings meant to give them a loft-like vibe.
Inventory for rentals is scarce, according to Karten, but he told us about a building around the corner from the Bertine Block, 459 East 135th, which has been totally renovated. The rent there for a three-bedroom, two bath apartment is higher than the average for the neighborhood at $3,200, but that  there are “great amenities,” such as hardwood floors, an in-unit washer and dryer and bluetooth stereo speakers in the living room.
On the actual Bertine block,  number 412, with five bedrooms and three-and-a-half baths sold for $602,000 this past summer.

A row of 12 houses near Audubon Park has a fascinating history—but do they have a future?

With its stately homes and green spaces, Victorian Flatbush has attracted everyone from silent movie stars to current Hollywood A-listers

Discovering Ocean Grove: religious camps, Suffragettes, and so much more

The virtual co-op board interview may be here to stay

What new changes to Local Law 11 do buildings need to know about?