Chester Court: A cul-de-sac in Brooklyn that feels like the U.K.'s Cotswolds

Peter J. Collins was a man with a housing plan. When, in the early 20th century, he designed and built Chester Court, a cul-de-sac with a row of nine houses on each side off Brooklyn’s Flatbush Avenue between Fenimore and Hawthorne Streets, he set out “to attract solid middle-class families to purchase homes in Flatbush," explains Andrew Scott Dolkart, professor of historic preservation at Columbia University School of Architecture, Planning, and Preservation. By 1911, when Collins started building, the Brooklyn Bridge was up, railroad access to the area had been established, and Prospect Park had been created, so all signals were “go” for real estate development. According to Dolkart, Collins’ plan was a good one then and remains a good one now: “Chester Court is a wonderfully picturesque cluster of row houses designed with extremely unusual Tudor-inspired facades. The fact that this is a short cul-de- sac gives the court a special sense of place.”

Collins’ efforts, according to Dolkart “were a great success and the houses remain largely intact.” Two years ago, the Court, which is part of Prospect-Lefferts Gardens, was designated as an official landmark by the NYC Landmarks Preservation Commission so the homes will stay intact or, as the LPC noted in its report, “remarkably well-preserved," with original clay tile roofs on all of the homes and some “historic wooden doors” remaining.

Saul Bolton, executive chef of the Norm Restaurant at the Brooklyn Museum, has lived for 10 years on Chester Court, an 18-minute walk from his job. Bolton says the homes on the block are all still single-family just as Collins intended. “My wife and I love the Tudor houses and the proximity to the park is a major plus with our kids," he says. "We still have some of the original interior features in our home—pocket doors, woodwork and layout—but previous owners have removed a good amount of the details over the years.” 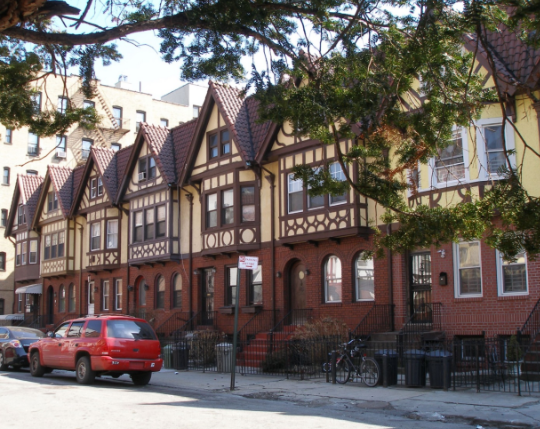 1. Brooklyn born and bred, Collins was one of the first to complete the architectural course at Pratt.

Collins went to work at 13 as a store clerk, but by the time he was 20 he was in the building business. According to the Brooklyn Daily Eagle, he was quite a success at it and the paper described him as specializing in “the designing and erection of the finest equipped private residences to be found in Brooklyn,” primarily in Park Slope. When Collins was appointed to the position of Brooklyn’s superintendent of buildings in 1904, he had civil engineer and architect added to his former title of builder.

The land that Collins bought for his row house project was once owned by Jeremiah Vanderbilt and, according to the LPC designation report, may have been part of a land patent that had been granted by Peter Stuyvesant in 1661. (In a separate transaction, Vanderbilt sold a portion of his vast land holdings that subsequently became Prospect Park.)

One of the most interesting features of the land that Collins acquired when he bought the parcel was a  mansion that had been built in the late 18th or early 19th century and commonly referred to as “the Old Vanderbilt homestead.” The wood-framed home stood just north of where he established Chester Court and was considered to be “one of the few remaining landmarks of Flatbush.” But, this was way before landmarks were protected from demolition as Chester Court has been; the home was demolished in the '20s after suffering the final ignominy of having served as the home of an auto repair shop.

2. A Collins family trip abroad inspired the style of the homes on Chester Court.

Jason Nixon, a former resident of Chester Court told us that he loved “turning the corner from Flatbush Avenue and stepping into the Cotswolds,” which is exactly what Collins intended. In the summer of 1910, Collins took a trip to England and was smitten by its Tudor architecture. (Apparently, he’s not the only American who has felt that way about the town:  Not long ago, Chester was voted the fifth prettiest city in Europe by Americans, beating out Rome, Paris, and Venice.)

The LPC report posits that it wasn’t the residences in Chester but its “Nine Houses”—almshouses constructed around 1650—that  “may have provided a direct inspiration.” Although Tudor Revival row houses began to be built in other parts of Brooklyn through the 1920s, Chester Court is “likely among the earliest Tudor Revival-style row house developments in Brooklyn, if not the entire city,” per the report.

The house that Collins and his wife moved into a year after they married was built in the Tudor Revival style by Collins’ younger brother Frank; it still stands at 135 Westminster Road.

3. The houses on Chester Court were designed for “easy housekeeping”—no servants required.

In the summer of 1912, an advertisement in the Brooklyn Daily Eagle for the Chester Court homes promoted, among other attributes, their “easy housekeeping” plan.

Around this time, the number of servants working in private homes was declining. According to the LPC report, the “servant problem” was attributed to a number of socio-economic trends which included the increasing expense of city life.

Collins understood the trend and designed his Chester Court homes to make them easy to care for—no maids required to “keep them in order.” The homes, which sold for $7,750 (“equal to any $9,500 house in Flatbush,” announced one ad posted on NY House Histories had a maid’s room on the third floor just in case, but the plan of the houses no longer included the spaces that had once been needed to maintain an “appropriate distance between the family and its help.”

The easy housekeeping plan meant that there was steam heat, a gas stove, and a laundry in the basement.

4. Even the wall on Chester Court has landmark status.

Because Chester Court was developed on land adjacent to the Brighton Line train tracks (now part of the B and Q subway line), Collins claimed, in his ads, that Chester Court was “the most convenient location in the city.” Slight hyperbole, yes, but it was true that prospective residents would have a fairly quick and uncomplicated route into Manhattan and back.

The original Brighton Line was built in 1878 as a way to deliver beachgoers to the shores of Coney Island and it didn’t connect with Manhattan until 1896.

The proximity of the rail line was good news for commuters but not so much for buyers who might object to seeing railroad tracks from their front yards. Collins’ solution was to build a wall, one that was designed to blend in with the design of the rest of the block.  Constructed of the same red brick used for the homes and embellished with pilasters and decorative panels, the wall does the job of screening out the subway line and even “contributes to the sense of the district as a distinctive self-contained enclave," according to the LPC.

Bolton, for one, says he likes the noise of the train: “Living on a cul de sac with the train on the end of the block...the sound of subway cars comforts  you like the crashing of waves at the ocean.”

The first rentals at 626 Flatbush Avenue, a high-rise called Parkline built just behind Chester Court, went on the market last summer. Of the 254 units, there are only 13 left. (Twenty percent of the building is designated as “affordable” housing.)

Although there was considerable pushback from some community members and some legal wrangling when the building was proposed and as it was being built, Bolton doesn’t have a problem with the latest addition to the neighborhood. "Parkline didn’t disrupt us much and it’s in our backyard,” he says.

Just as a newly built Prospect Park attracted Chester Court buyers 100 years ago, the greenspace was also a lure for prospective Parkline renters a century later. The views of the park from the highest floors, as reported in Curbed, are “pretty ridiculous."

The amenities are pretty impressive too: In-unit washer and dryers, a gym and yoga studio, a playroom, a screening room, a sky terrace with barbecue grills, private veggie gardens, a pet grooming room, a penthouse lounge with a fireplace, and a private “sky kitchen” where you can entertain if your own space is too confining. 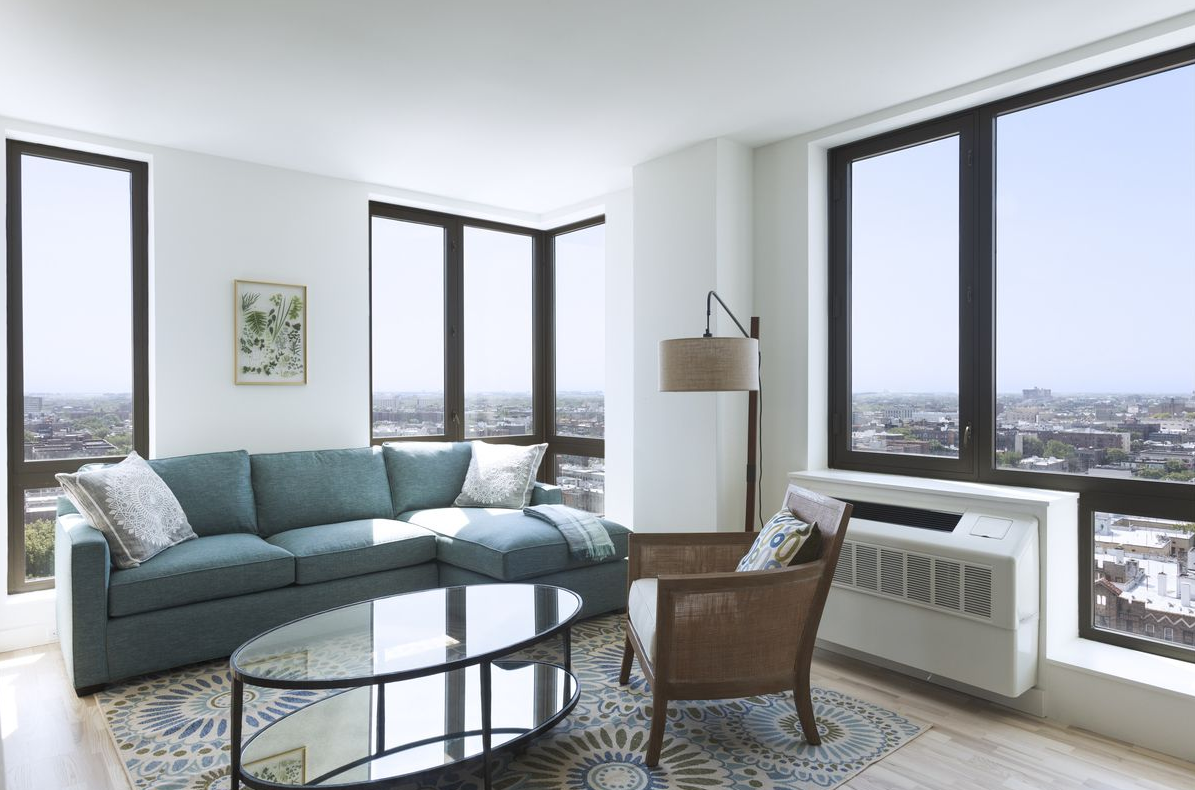 With its stately homes and green spaces, Victorian Flatbush has attracted everyone from silent movie stars to current Hollywood A-listers

Bertine Block : A small street in the Bronx that offers a window into 19th century NYC

An adventure every morning: What it's like to commute from Jersey City to Williamsburg via two ferry lines

What is the difference between a co-op offering plan and a proprietary lease?