Skip to main content
RECOMMENDED IN RENT
Moving to NYC after college? Here's how to do it Brick Underground's 2021 guide to co-living spaces in NYC: How to tell the communal disruptors apart The 7 best ways to find a short-term rental while you renovate your NYC apartment NYC apartment leases with major concessions are coming up for renewal. Here's how to negotiate 5 things you should know about renting month to month in NYC
RECOMMENDED IN BUY
How buying real estate in NYC is unlike anywhere else The most expensive neighborhoods in NYC: A buyer's guide for 2021 Buying for the first time in NYC? Be sure to prep your finances first 10 steps to creating a stellar co-op or condo board application
RECOMMENDED IN SELL
A guide to using a no-fee renovation loan from a NYC real estate firm How much does moving to the suburbs cost vs. staying in NYC? What's the best shade of white to paint your NYC apartment if you're trying to sell? Should you sell now or wait? NYC brokers and experts weigh in
RECOMMENDED IN IMPROVE
How to make your NYC renovation more pet-friendly Renovating or adding a kitchen island to your NYC apartment? Here's a checklist The 7 best ways to get your landlord to fix stuff in your apartment Want to use reclaimed materials and appliances for a renovation? Here's what you should know How to deal with flood or water damage in your NYC apartment
NYC Pet Tales

Crista Scaturro and Zoe at home in Brooklyn

Despite the fact that most New Yorkers have cramped living quarters, little in the way of outdoor space, and around-the-clock work schedules, many of us still have pets—and don't know what we'd do without them. In our new column NYC Pet Tales, we'll speak to pet owners about how they make life in New York work with their animal companions.

Crista Scaturro is a doctoral student in clinical psychology who lives in Brooklyn with a roommate and her five-year-old dog Zoe. She found Zoe in the parking lot of a Long Island shopping mall in April 2013, when Zoe was just a puppy.

"I walked over to this group that was trying to corral this little puppy, who didn't have a collar or anything, and she just sort of came to me," Scaturro says.

She couldn't find the dog's owner, and after taking her to the vet, Scaturro decided the puppy should be hers.

"I was not in the market to get a dog," she says. "My partner and I had just gotten back into our apartment on Long Island after Sandy, and they didn't allow dogs. But I always had them growing up, and I do love dogs."

Likely a boxer-pitbull mix, Zoe is high maintenance. Scaturro has since moved to Brooklyn, her relationship with her partner has run its course, and she can't imagine facing life in the big city without her dog.

"She's so anxious, and needs to be around me at all times," Scaturro says. "Right now, as we're talking, she's lying next to me but has to be touching my body. She can't be left alone."

"She goes to daycare when I'm at work and school, and if I'm going out any other time, I have to get a babysitter," she says. "The people from daycare will charge about $20 an hour for that."

Sometimes, she hires a young girl in her building instead.  Scaturro explains that the neighbor "likes to do it because she wants a dog and her parents won't let her have one."

"As soon as the lease on my apartment became mine, I've made sure every roommate has a dog, because Zoe likes to be with other dogs," she says. "It's also just easier to have someone else who understands the responsibility, and you can help each other out."

When your dog hates being outside in the city

New York's paucity of green space is a problem for this sensitive soul, according to Scaturro.

"Zoe also hates being outside, and sights and smells, people, places and streets," she says. "If there's no grass, she won't do her business."

This isn't quite so horrible as it sounds, though.

"Luckily, I have lots of patches of grass nearby, and there's a dog park across the street, which she tolerates," Scaturro says. 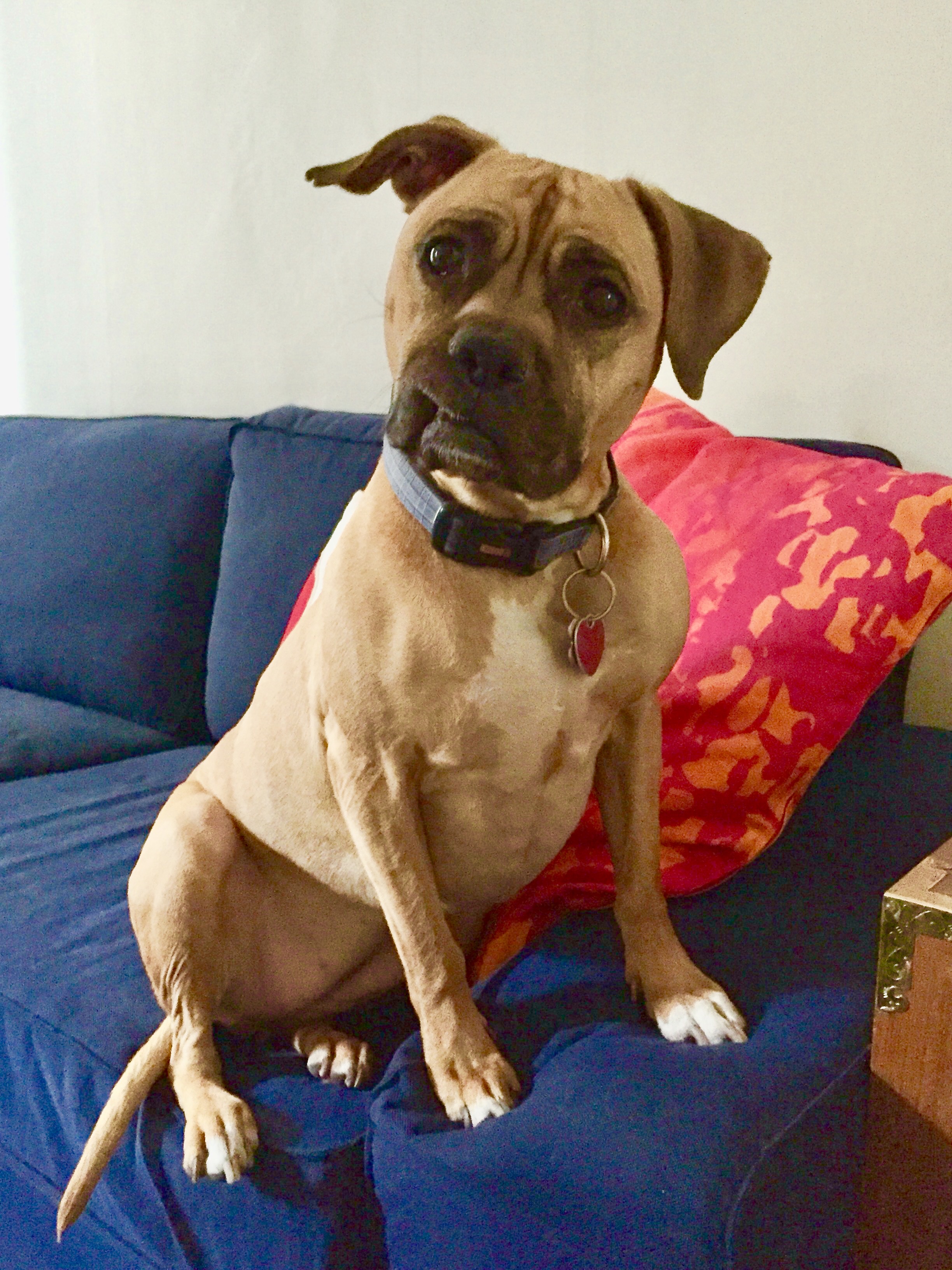 Learning to manage with an anxious dog in the city

Zoe has been on doggie Prozac, but that never fully helped. Daycare helps, Scaturro says, because of the forced separation from her owner.

"I've also found that a massive bone can keep her occupied—and I mean massive—while I go for a run for an hour," she says. "Otherwise, she just stands at the door and cries. Our next door neighbors have a yappy dog, though, so they're not going to complain about Zoe."

The best thing about owning a pet in NYC

"New York can be a hard place," Scaturro says. "A lot of negotiating one's way though the city can be unpleasant, mentally, physically, and emotionally. To come off the subway after a long day of those difficult negotiations and face my dog is everything. I can't imagine how I'd do it without her." 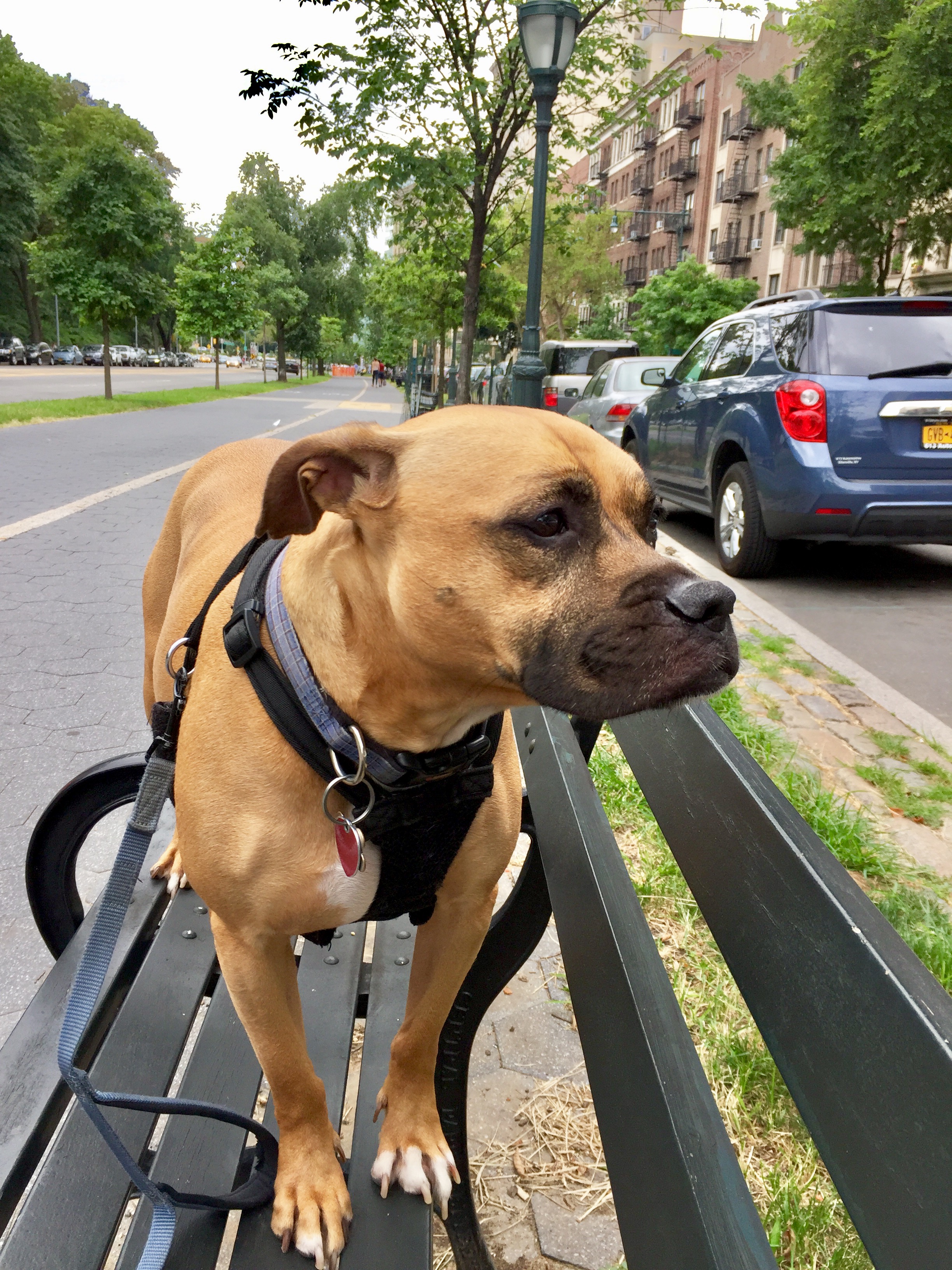 The hardest thing about owning a pet here

The obvious big one is the lack of a yard, Scaturro says. And it doesn't help that Zoe won't go on concrete.

Also, there was the breakup. "If I'd have known I wouldn't be with my partner anymore, I probably wouldn't have taken it on by myself," Scaturro says. "There's the financial aspect—health issues, surgeries, daycare, etc."

Scaturro pays about $800 for a package of 40 daycare stays, to be used on her own time.

Picking the right neighborhood and building

Living on Eastern Parkway is helpful, according to our narrator. There's lots of green space, and the aforementioned dog park across the street.

Finding a building that would allow Zoe, who weighs about 50 pounds, wasn't easy.

"Lots of buildings allow dogs, but not dogs that big," she says. Happily, her medium-sized prewar co-op was a go.

Scaturro swears by the Greenies Pill Pockets for Zoe's medication.

"Whatever I give her, she'll eat it up, no problem," she says.

Kids + Pets 4 key questions to ask before you live with a pet in NYC
Live 13 must-have NYC dog accessories that are for you as much as your pooch
Improve Rent Coach: My neighbor's dogs are driving me crazy
Brick Underground articles occasionally include the expertise of, or information about, advertising partners when relevant to the story. We will never promote an advertiser's product without making the relationship clear to our readers.
topics:
NYC Pet Tales
SHARE
TWEET
BRICK’S PICKS

Looking for off-campus housing in NYC? Here’s what you need to know
THE BU PODCAST