The creators of "The Doorman" on world-building, rooting for the underdog, and why Times Square is like Westworld

The Doorman, out from Heavy Metal, written by Eliot Rahal and Daniel Kibblesmith; art by Kendall Goode.

You've likely never seen a hero before quite like the one in The Doorman, a four-issue comic book series available now from Heavy Metal and at all locations of Midtown Comics in NYC. Henry Clay Waters looks like your average New York City doorman, but what he's actually been guarding for the past several decades is a portal between worlds. The story begins when Waters' last day on the job is interrupted by an unexpected visitor, kickstarting an inter-planetary adventure for the unassuming serviceman.

The comic's creators are Eliot Rahal, a Minneapolis-based comic book creator, Daniel Kibblesmith, a New York comedian who writes for The Late Show with Stephen Colbert, and Kendall Goode, a comic book artist who lives in Maryland. We caught up with them to talk about the development of their sci-fi series, how New York City living shapes you, and the importance of not overlooking the little guy.

Could you tell me a little about your backgrounds? And for Daniel, what inspired you to make the jump from comedy writer to comic book author?

DK: Eliot and I met years ago, doing comedy—him doing stand-up, and me showing videos—at a club in Chicago called the Lincoln Lodge (which is currently holding a fundraiser, Google them!). He was about to start his Marvel internship, and we realized we were both budding comic book writers, in addition to being comedy weirdos. So I've been trying to break into comics just as long as I've been trying to break into comedy. I'm pretty lucky that I get to do both.

ER: Chicago underground-alternative stand-up comedy: That was my life in college.

I fell in love with comics in high school, and storytelling has always been my number one goal. After Marvel I started getting more published work. My first major break was The Paybacks from Dark Horse (Later, relaunched at Heavy Metal). Since The Doorman, I’ve also been fortunate enough to work with STELA and Valiant. I also have pretty big announcements—big for me, at least—coming out in 2017.

KG: Comics have always been my goal and I discovered that there were art schools with specific comic book degrees. Since graduating, I’ve been doing whatever I can to get published. A few projects that didn’t make it or small jobs here and there. But The Doorman is my first real published comics work.

How did the three of you end up collaborating, and what was the process like from coming up with ideas for the comic?

ER: I’ve always been an admirer of Daniel’s work, even since our Chicago days. One day, I saw that Daniel had gotten a back-up in a Valiant story. And I was like, “Wow!” So I shot him an email, and well, here we are.

DK: We'd talked about working together for years, and it was really just a matter of scheduling, and getting to a career place where we could start pitching to publishers. By this time, we lived in different cities, so Eliot would pitch me ideas over the phone and let me sign on to collaborate on whatever intrigued us both the most.

ER: In regards to Kendall… Well, he was a no-brainer. You see his work. You take the idea of the book. It’s a slam dunk. Really, the trick was getting him to work with us.

KG: After a few emails, I had a phone call with the two of them. They had an idea that fit with so many of my interests and sensibilities, it just seemed like a no-brainer. We developed a small pitch, with designs and a few comic pages. They gave me a ton of freedom as we went on, especially putting out the single issues. But Eliot and Daniel did an incredible job writing the scripts in a way that fed into the visuals. It made my job pretty easy, being so inspired. 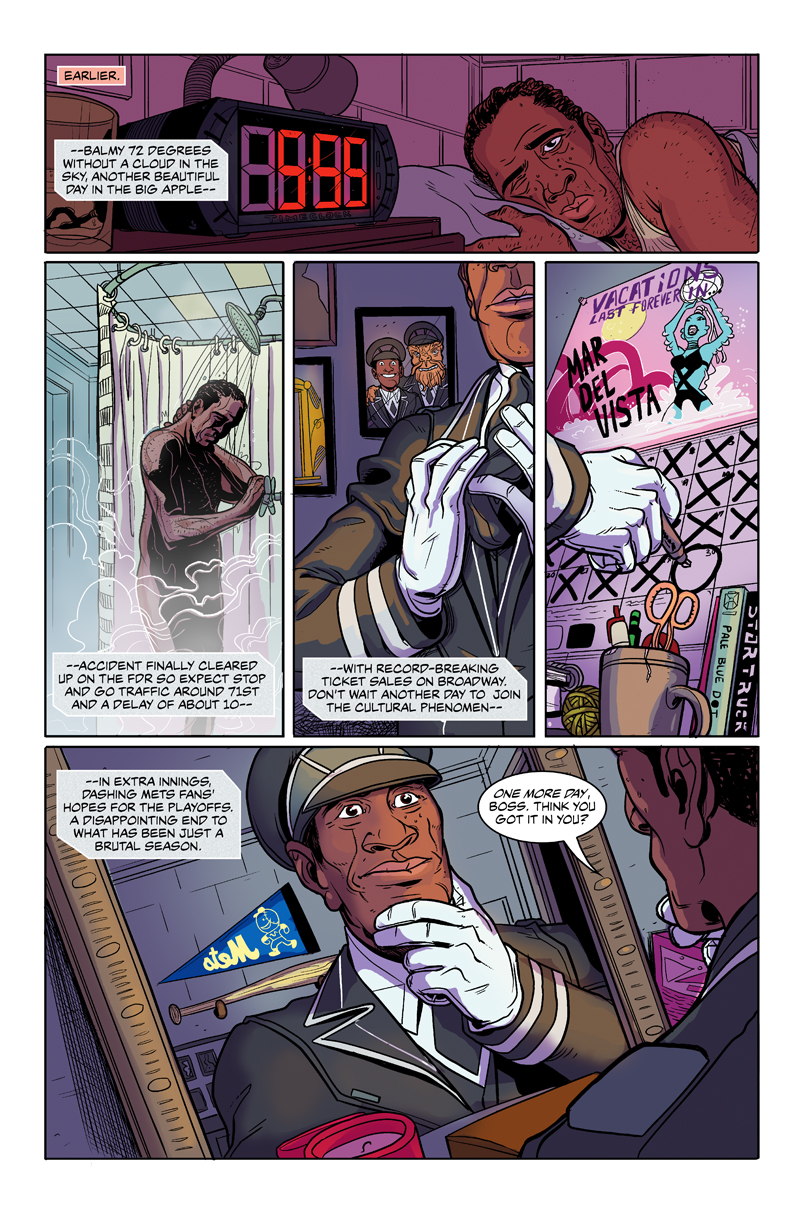 What made you choose a doorman to be the hero? How much did real-life NYC doormen play into the characterization?

ER: I just like odd heroes. Stories from people you don’t really hear about, or think about. I’ve always identified as a bit of an underdog, or a square. So… those are the types of people I think are fun to write about. They aren’t sexy. They're just real, no matter how much cool space stuff is happening! In terms of design though… Really we only had a few key notes. Kendall really ran away with it.

KG: Yeah, having never been to NYC, so much of my understanding of Doormen is from TV shows, like that episode of Seinfeld. But doormen, a profession that evokes the past so much, combines really well with something so opposite like high-technology alien sci-fi.

DK: I now live in a building with doormen, and it's extremely helpful and extremely weird. Every time I enter or leave my house, I'm also walking through someone else's office space. When Eliot pitched it to me, it seemed like the perfect metaphor for a person relegated to the sidelines while other people come and go—and the perfect device for traveling to random planets. Kendall's designs are all from his amazing brain, but I was definitely inspired by a doorman I saw in NYC in his winter gear: A long black super-heroic coat, like something out of The Matrix, and an official looking black cap that wasn't quite a policeman's hat. Like he was the law enforcement officer of another planet.

In the first issue, the doorman says, "Just because something's old doesn't mean you throw it away." It made me think of the constant Old New York versus New New York debates. Did that inform the story at all? How else do your experiences of NYC inform the comic?

ER: Yes. I mean I only lived in NYC for a short period. About half a year. I was poor. I was an intern. I was mostly drunk. I felt invisible in New York. Yes, there is a sort of strange power you can derive from that. However, an intense loneliness as well. As for Henry Clay Waters—our Doorman—there is definitely a forgotten working class feeling that we put into him. I think it’s something we all can connect to. It’s the whole “world moves on but I’m standing in the same place kind of thing.”

DK: It's pretty impossible to live in New York without witnessing the growing class divide, appropriate for a whole book about an era where the service industry was associated with dignity being muscled out for a new kind of more garish luxury. The metaphor definitely works on a lot of levels. Old vs. New, Retirement vs. Termination, The One-Percent Vs. The People who have to wait on them. Plus, we get to make fun of Times Square, which is the worst. It's basically Season 2 of Westworld but with more Elmos.

KG: Eliot and Daniel put it really well. I haven't had any real experiences with NYC, but there's clearly an interesting representation of those "new versus old" debates. And they threw it all on it's head by making the slower public transportation the 'new' and the crazy high-tech-portal-doorway the 'old'.

It seems like you're skewering a lot of other social concerns, too—celebrity culture and corporate control of the media, for instance. What do you hope is the main takeaway for readers? 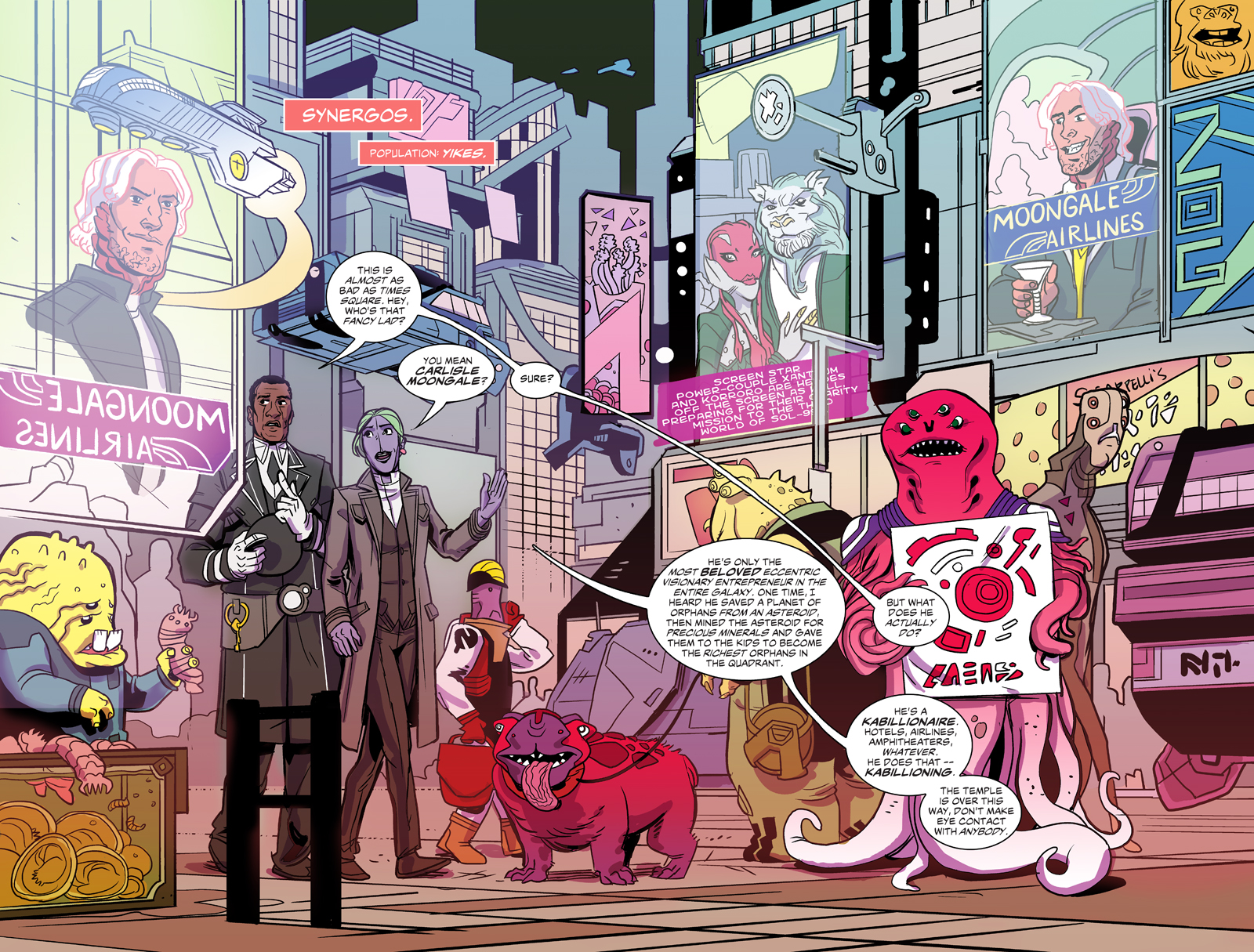 How did you come up with the look for the alien planets, and the creatures that live there?

KG: Eliot and Daniel honestly took away a lot of the burden by writing their scripts with such clarity. They tell me a scene takes place at a robot controlled zoo-museum for all of the galaxy’s information and I know what I need to draw.

ER: Yeah, we make our little jokes. We think to ourselves, “Oh, wouldn't it be funny to see a lava planet with flaming pterodactyls?” Then we write it. And then Kendall blows our minds. Really. He is the reason why this book has such a big scope.

What are some of the other influences on this series?

ER: Futurama FOR sure. Rick and Morty. Classic Simpsons. Doctor Who. Stargate. Also. Strangely...The Muppets. I love the Muppets. And I love how funny it is that they live in the world that they do. It’s so absurdly normal.

KG: Oh, definitely Futurama, Rick and Morty, Star Trek. I could go on and on with influences for this book.

DK: For me, Futurama was the big one. No one else blended emotional resonance with that much hardcore sci-fi and that many jokes until probably Rick & Morty. If you like that kind of gonzo, outer-space genre-blending, The Doorman might be for you.

Any plans for a next issue?

DK: Not immediately, but if you read the last issue, you know the door's wide open for future adventures. All these puns are intended by the way, and we apologize for none of them.

ER: I love puns. Which is why I love doing this series. Always hoping and trying to return to it.

The Gotham Writers Workshop's Kelly Caldwell on Stuy Town, transit sharing, and why flu shots are a must for New Yorkers

art doorman
Brick Underground articles occasionally include the expertise of, or information about, advertising partners when relevant to the story. We will never promote an advertiser's product without making the relationship clear to our readers.
Share:

One NYer's housing hack: Own a house on a lake in Suffolk County, crash in Bushwick during the week