There are some practical considerations when buying or renting an apartment where the ferry will be your main mode of transportation.

Thanks to new ferry routes, New Yorkers have an alternative to buses and the beleaguered subway system, but there are a few things to consider before making a boat ride your go-to transportation method.

On the one hand, depending on where you live, you get a shorter commute that is more pleasant, and less-crowded (with snacks and booze!) thanks to the NYC Ferry. As routes are added and new developments like One Manhattan Square, Skyline Tower, and Greenpoint Landing rise along or near the city’s waterfront, the ferry is increasingly a viable commuting option for residents, and that's also a boon to people who live in far flung areas like the Rockaways and the Bronx, which were previously underserved by transportation. NY Waterway provides service along the New Jersey waterfront (which is having its own development boom) to several points in Manhattan.

But it might not all be smooth sailing. You may find higher housing costs, walking distance to the ferry, and your own sea-worthiness a drawback. For details, read on.

1. Will I pay more to live near a ferry?

You will pay more for an apartment close to a ferry stop, but not as much as you would for one right by a subway station, says Jennifer Rouse, a broker at Citi Habitats. She recently helped a couple buy a condo in Astoria to be close to the ferry landing. They work in the Financial District, where ferry routes converge at Wall Street/Pier 11.

That’s because waterfront development is a relatively new concept for certain parts of NYC, says Jonathan Miller, president of appraisal firm Miller Samuel. Because of master builder Robert Moses’s preference for building highways along the region’s waterways, “we’re one of the few cities that places more of a premium on looking at Central Park than looking at the East River,” he says.

But New Yorkers' focus is increasingly shifting to its waterfront with new parks as well as new ferry lines and developments.

Glitzy Hudson Yards is getting its own ferry stop at West 39th Street/Pier 79 next year. Hudson Yards has a median asking rent of nearly $4,000 for a one-bedroom apartment, according to StreetEasy. That's just slightly more than one bedrooms ask for in Battery Park City, which has a ferry stop at Vesey Street.

In outer borough neighborhoods with ferry stops, like Sunset Park, you'll pay $1,700 each month for a one-bedroom; in Bay Ridge, it's $1,699. 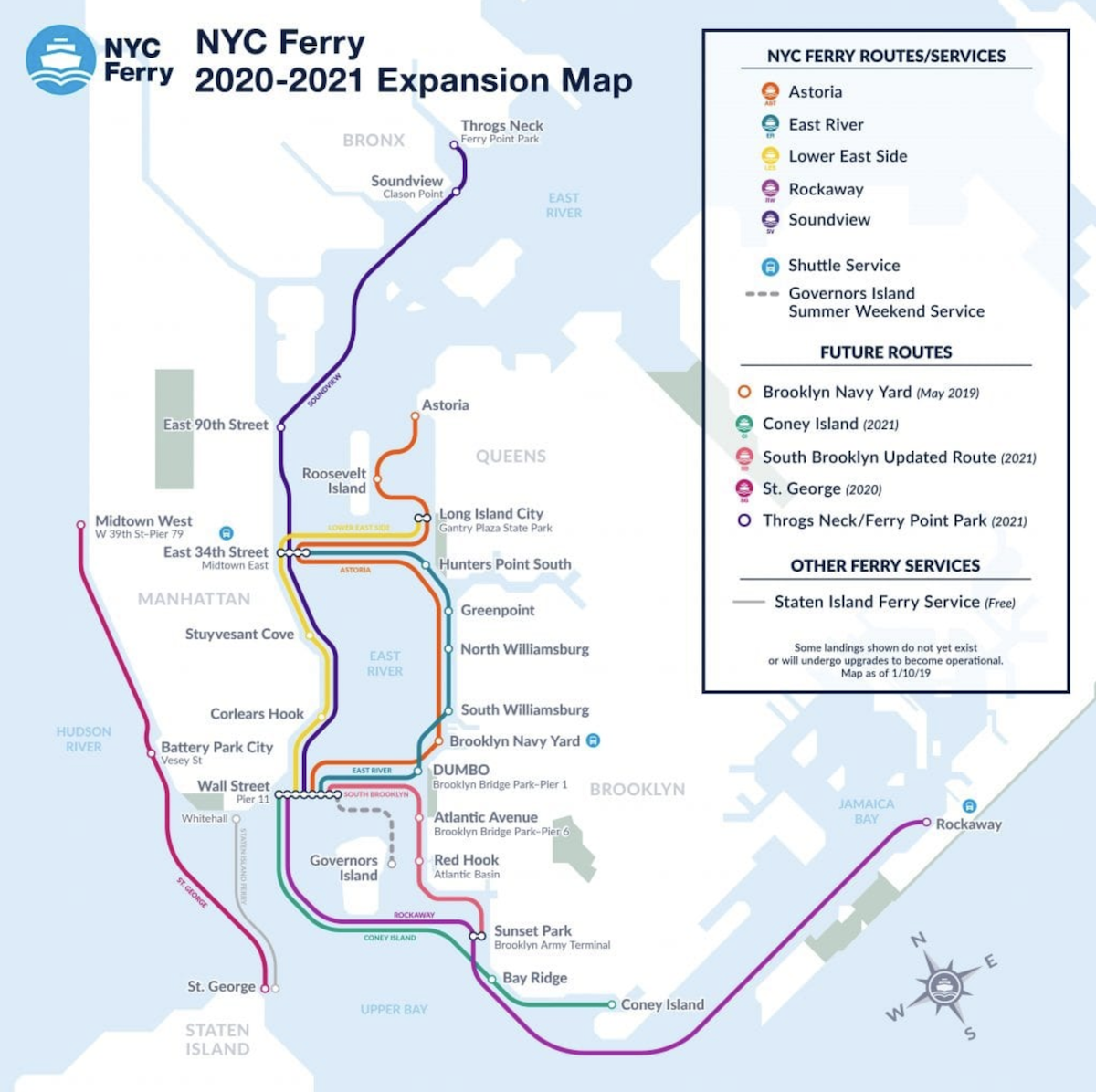 2. How far is my walk to the ferry landing?

If you live in a building right on the waterfront with access to ferry service, good for you—but for many people the nearest ferry landing is likely a hike. Be sure to map out how far the ferry stop is on foot on Google Maps, and factor in the subway as a backup route.

Some residential buildings offer shuttle service to ferry stops and both the NYC Ferry and NY Waterway provide free shuttles at certain landings.

3. Do I get motion sickness?

It's a personal question, but you should know that the ride is fairly smooth—and I'm someone who avoids city cabs, rideshares, and buses because of severe motion sickness. I took the ferry almost daily for six months and occasionally got queasy on stormy days when the river was particularly choppy. Though I was fine inside the cabin, I’d always try to be out on the top deck—even when the weather cooled—because fresh air helps me avoid getting sick. Plus, my trusty Sea-Band wristbands were always on me just in case, but I never used them like I do on most cab and bus rides.

4. Will I really ride the ferry year-round?

Though its non-peak schedule is more limited when the weather cools, the NYC Ferry runs year round, as does NY Waterway. But some ferry landings might not be covered. Only half of NYC Ferry’s landings are, though most have windscreens and heaters, which helps, but you're essentially still waiting for the boat somewhat exposed on the water, where wind makes cold weather feel even colder.

Another thing to keep in mind is the walk to and from the landing to your building, which may be pleasant in spring, summer, or fall. But “do you really want a walk like that on a cold, bitter day or during a thunderstorm?” asks Gina Castrorao, rental manager at REAL New York. “It’s great if you live next to a ferry, but it can be daunting if not, so budget weather and seasonality in.” (Of course, many people have to hike to the subway in all kinds of weather, too.)

The good news is the temperatures inside the cabins are comfortable no matter the season. That's certainly not always the case on the subway.

5. Can you afford to pay for the ferry and subway?

The NYC Ferry may cost the same as taking a MTA subway or bus, but you can’t use your MetroCard to ride it. So you’ll likely still need the card to get to those areas beyond the waterfront, and paying for both forms of transit can be expensive. If you live on the other side of the Hudson, it’s even costlier as monthly NY Waterway passes from New Jersey can cost hundreds of dollars—and one-ways trips are well more than the $2.75 MTA rate, depend on where you set sail from.

A workaround might be an unlimited monthly ferry pass and MetroCards in $40 increments for when you need to go somewhere the ferry can't.

Astoria buying Chelsea Hudson Yards neighborhoods New Jersey renters renting transportation
Brick Underground articles occasionally include the expertise of, or information about, advertising partners when relevant to the story. We will never promote an advertiser's product without making the relationship clear to our readers.
Share:

Do I need renter's insurance if I'm subletting a condo?

What is a no-fee apartment?