Sublet listings spiked in June, breaking record set way back in May

A shuttered beauty salon in Jackson Heights, Queens in May. The city’s unemployment rate is about 20 percent.

Another month, another record spike in sublet listings from New Yorkers looking to get out of their expensive rentals as NYC grapples with the aftershocks of the coronavirus pandemic. The city’s unemployment rate is about 20 percent—a figure not seen since the Great Depression, according to the New York Times 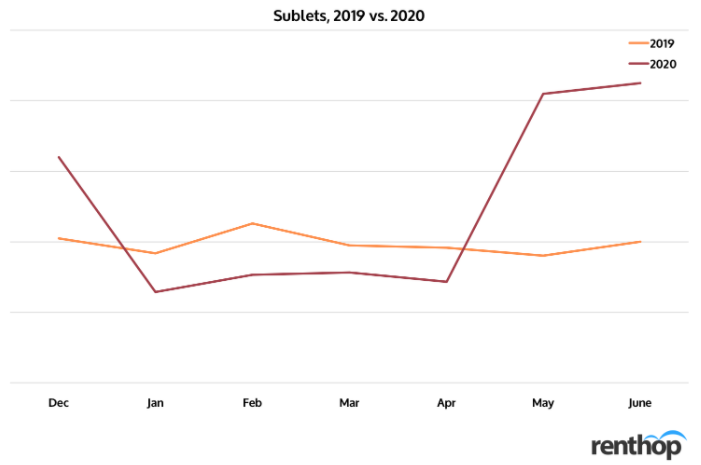 “This sudden spike in sublet listings may be considered early evidence the city is witnessing an outflow of residents to the suburbs or other metropolitan areas, likely as a consequence of the Covid-19 pandemic and increased ability to work from home,” the report says.

The neighborhoods that saw the biggest spikes are Astoria, Yorkville, Williamsburg, the West Village, Chelsea, and Battery Park City.

A second exodus? Some NYC families may move if learning remains remote in fall

Coronavirus leases market reports renting subletting tenants
Brick Underground articles occasionally include the expertise of, or information about, advertising partners when relevant to the story. We will never promote an advertiser's product without making the relationship clear to our readers.
Share:

Renters ask: What happened to landlords' promises to 'work things out'?

I negotiated a lower rent when renewing my lease. Here’s how I did it

Protesters march after curfew, some tenants still at risk of eviction, & more

The NYC neighborhoods where rents are rising and falling