Sellers are hiking up prices in Long Island City, where Amazon plans a massive new headquarters, but the excitement surrounding the expected influx of well-paid employees doesn’t appear to be spreading to pricing beyond the neighborhood.

According to a new report from StreetEasy, in the five weeks after Amazon’s plans were leaked, 18.8 percent of apartments for sale in Long Island City increased their price. Notably, before that period, the sales market there was struggling with too much inventory and there were no price increases.

You might expect to see corresponding price increases in neighborhoods within commuting distance of Long Island City, but so far this isn’t the case. No other neighborhood saw a dramatic price increase in response to Amazon’s HQ2, the report said. 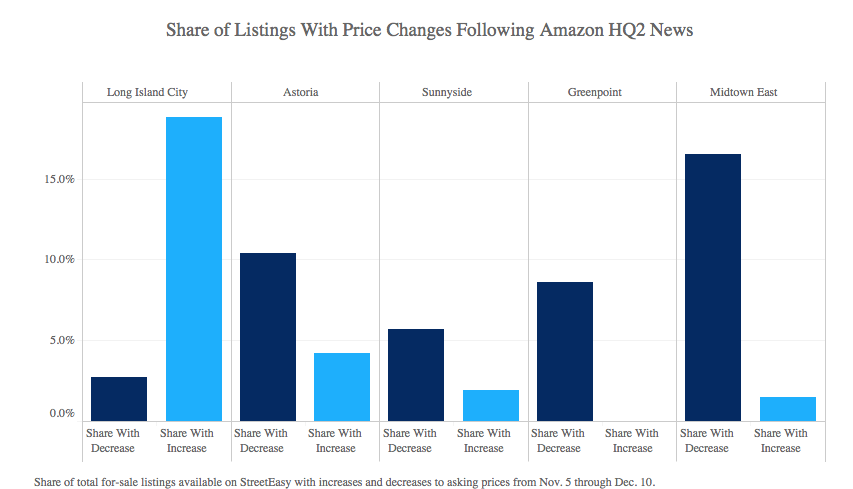 But the hype is showing up in marketing language in a big way. Listings for apartments Manhattan, Brooklyn and other parts of Queens are mentioning their relative proximity to Amazon’s future HQ2. Three listings in the LIC area tout the incoming Amazon campus, as do listing descriptions for another 75 units for sale in 48 buildings across Manhattan, Queens, and Brooklyn, the report said.

Last week, the news that Amazon plans to bring in employees in phases may dampen some of the enthusiasm. The Real Deal reported via the Wall Street Journal that Amazon will bring just 700 employees to LIC next year. It won’t reach the full 25,000 for another decade.

What happens to apartment prices and rents if Amazon's HQ2 lands in Long Island City?

co-ops condos Long Island City market reports
Brick Underground articles occasionally include the expertise of, or information about, advertising partners when relevant to the story. We will never promote an advertiser's product without making the relationship clear to our readers.
Share:

Moving to NYC after college? Here's how to do it

A broker is misrepresenting a condo in my building. Should I report it?

The big deal about pieds-à-terre, Washington Heights vs. Inwood, & more