Skip to main content
RECOMMENDED IN RENT
Moving to NYC after college? Here's how to do it Brick Underground's 2021 guide to co-living spaces in NYC: How to tell the communal disruptors apart The 7 best ways to find a short-term rental while you renovate your NYC apartment NYC apartment leases with major concessions are coming up for renewal. Here's how to negotiate 5 things you should know about renting month to month in NYC
RECOMMENDED IN BUY
How buying real estate in NYC is unlike anywhere else The most expensive neighborhoods in NYC: A buyer's guide for 2021 Buying for the first time in NYC? Be sure to prep your finances first 10 steps to creating a stellar co-op or condo board application
RECOMMENDED IN SELL
A guide to using a no-fee renovation loan from a NYC real estate firm How much does moving to the suburbs cost vs. staying in NYC? What's the best shade of white to paint your NYC apartment if you're trying to sell? Should you sell now or wait? NYC brokers and experts weigh in
RECOMMENDED IN IMPROVE
How to make your NYC renovation more pet-friendly Renovating or adding a kitchen island to your NYC apartment? Here's a checklist The 7 best ways to get your landlord to fix stuff in your apartment Want to use reclaimed materials and appliances for a renovation? Here's what you should know How to deal with flood or water damage in your NYC apartment
Rent

How can I tell if a NYC apartment building has smoking complaints?

A single Brooklyn address accounted for close to 7 percent of last year’s complaints.

If you're searching for your next apartment, second-hand smoke lingering in a building is probably a deal breaker for you. But even if a building has a no-smoking policy, you should still check out whether there are any smoke-related complaints before moving in.

That's because according to a new report by Localize.city, many New Yorkers have complaints about their neighbors smoking. Over 1,800 such complaints were called in to 311 from August 2018 to August 2019.

Last year, a city-wide apartment building smoking law was enacted. The law requires all buildings with three or more units to create smoking policies and to post the smoking rules in the building. But, the law simply requires a smoking policy, not necessarily a smoking ban. Additionally, In buildings with 10-plus units, smoking in common areas like lobbies and hallways is strictly prohibited. But this being NYC, people don't always follow the rules.

All five boroughs have a considerable amount of complaints, according to Localize’s report, with Brooklyn topping the list at 557 complaints in 172 buildings. Staten Island had the fewest number of complaints, with a total of 85 complaints across 11 buildings.

See how your borough stacked up below. 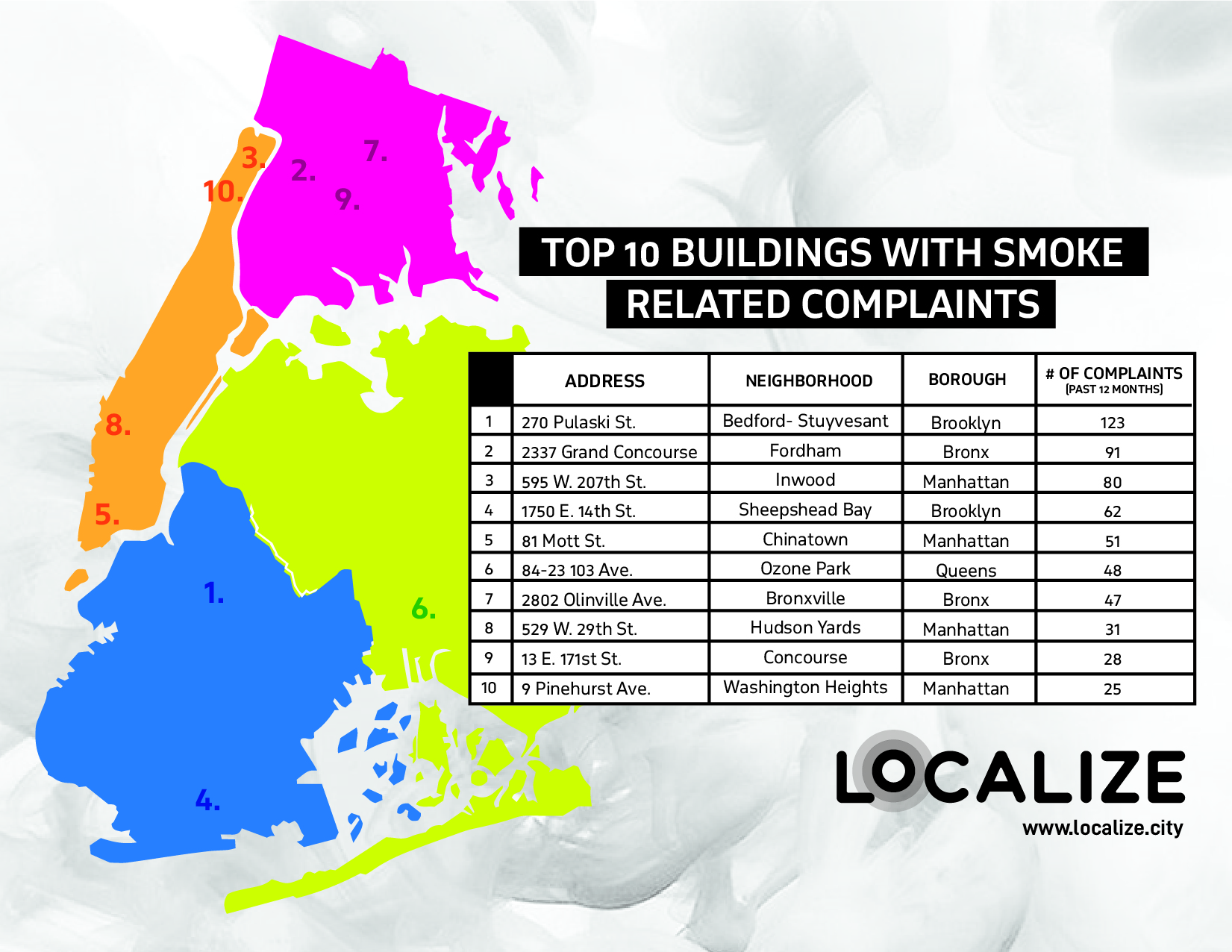 Live How can I stop my neighbors from stinking up the building common areas with their smoking?
Live Dear Ms. Demeanor: My building has cigarette butts everywhere. It's disgusting. What can I do?
Buy What are my rights under the new NYC apartment building smoking law?
Brick Underground articles occasionally include the expertise of, or information about, advertising partners when relevant to the story. We will never promote an advertiser's product without making the relationship clear to our readers.
topics:
Bronx Brooklyn house rules Inwood Queens rent smoking Staten Island
SHARE
TWEET
BRICK’S PICKS